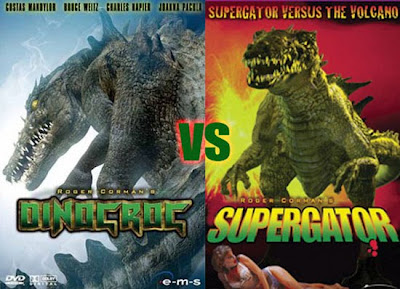 This one will surely be etched into the annals of cinematic history. I was tempted to write about Toy Story 3 which I watched earlier this week, but it would be folly of me to not touch this first. I'll save TS3 for next week as a summer bonanza themed week which should include some combination of A-Team, Predators and Inception.

But before I talk about this movie, I should get something off my chest. You see, I'm confused. I obviously can't hold this movie up to the same standards as I would with something like Apocalypse Now or The Godfather. With titles like The 41 Year Old Virgin Who Knocked Up Sarah Marshall and Felt Superbad About It or Bachelor Party in the Bungalow of the Damned, it's obvious that they don't stand under the same light. So with DTV movies like this, I'm left with no other choice but to create a second standard. So I've thought long and hard about it and I boiled it down to one criteria for these movies: did it leave me bored. It's as simple as that. You can stretch that one standard anyway you want, but I think it will always return to that parent idea of boredom.

Which brings us to the cinematic realization of Dinocroc VS Supergator. How can I say this. Hmm. What a shitty film.

Much like Mongolian Death Worm, this was another SyFy Channel produced movie and the quality clearly falls under their brand. The story was no good, the acting was no good, the effects were no good. I think the gore factor was ever slightly better than Mongolian Death Worm, but that's not saying too much as that movie was virtually bloodless. The movie was filled with a bunch of no namers so I can't really prod them with that. However, the cast was capped off with none other than David Carradine. Yes, one of his many posthumous works. Carradine does his thing, whether you like it or not. He is the standout in this movie if only for the fact of wonderment of why he's in this movie.

I think what made me bored was that I couldn't follow all of the characters. This seems to be a common flaw of DTV movies. They introduce too many characters and its hard to follow all the angles and really, it's not worth the effort either. Your life won't be better off for following each little arc. So yah, too many side stories, characters and no development make for increasing disinterest.

Well, I admit, I fell for the trap. Yes, I fell for the wacky title. I watched the trailer a few months ago and thought that something like this couldn't fail; it had to captivate my interest. You may have noticed that I didn't talk about the story. Well, there's no need. You have a dinocroc and a supergator battling, that's all you need to know. If that piques your interest, then have at thee, otherwise, steer clear folks. Til next time, later geeks!