November 03, 2009
Welcome to another installment of DTV Madness!!! This time we take a look at Wrong Turn 3 and Bachelor Party in the Bungalow of the Damned. Both are horror movies and that's about where the similarities end. 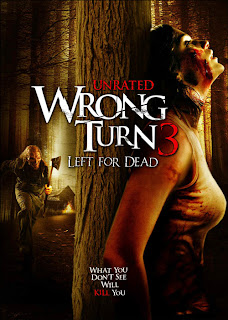 I saw the first Wrong Turn when it originally came out for a theatrical run and I quite enjoyed it thanks to the gory effects, Eliza Dushku *drool*, and Jeremy Sisto. Somewhere between then and now, Wrong Turn 2 was released. I never saw it or even knew it existed, but it's out there apparently. So I saw Wrong Turn 3: Left For Dead last week and actually had a pretty good time with it.

There's not much to the plot (well, it is a horror movie). Basically a busload of convicts are being transferred from one prison to another. On their voyage, the bus gets runoff the road and taken down by the mountain men that dwell in the forest. From then on, it becomes a survival story but the mountain men are watching... and are hungry.

The story is as predictable as it gets, but what really made the movie work for me was all the gore, blood, and the inventive kills. From the opening sequence where a bunch of campers and a buxom young lass get dispatched, we know that we're in for a wild ride. The practical effects and even the CG blood effects are pretty well done. The incestuous mountain men look pretty hilarious but not as good as the ones from the first Wrong Turn as I recall. These ones look basically like a mix between Gollum from Lord of the Rings and the hillbillies from Deliverance.

Although this was a low budget DTV movie, I should note that it was backed by Fox Home Video, so it's of the high low-budget caliber of movies. It probably explains why the gore and blood were done so well. It even had TV spots 2 weeks ago advertising its release which surprised me.

It's out on video now so feel free to rent it if you're bored on a Friday night.


Bachelor Party in the Bungalow of the Damned 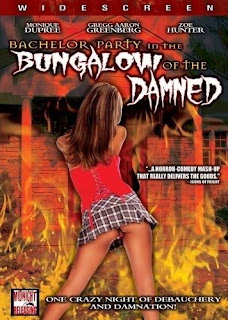 Honestly, if you know of a movie with a better movie title than this, then I'd like to hear it. This is likely one of the best titles I've ever heard for a movie. Well, now that I got the good aside, let me get to the bad. THIS MOVIE WAS SHIT!!#$%#$#%#$!!$!!!

What a waste of time! I've said it before. Most of the time when you venture into the DTV territory, you've gotta be prepared to watch some shit, because 9 times out of 10, that's what you're going to get. After watching this movie, I feel as though I were served shit as an appetizer, given a shit entree, capped off with some sweet shit for the desert. Point being: I was given shit the whole time.

Yes, the movie was that bad and yes, it was made on a super low budget. But that's not an excuse. I've seen a ton of low budget movies and I've seen that they can be good. It's not an impossibility.

Oh yeah, I didn't even get to talk about the movie yet. Well fuck this movie!!!!!!!!!!! I was in such a good mood before writing this review. Now I feel like I'm full of anger and vitriol.

I'm calm again. But that's not enough to get me to talk about this movie. Heed my warning my friends, heed my warning. Later geeks.