DTV Madness: The 41 Year Old Virgin Who Knocked Up Sarah Marshall and Felt Superbad About It 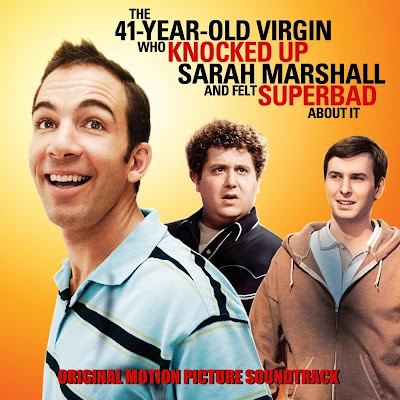 The 41 Year Old Virgin Who Knocked Up Sarah Marshall and Felt Superbad About It is a DTV parody movie similar in vein to Shriek If You Know What I Did Last Friday the 13th which was really the cheaper DTV version of Scary Movie released the same year.

In T41YOVWKUSMAFSAI (abbreviated title), as the title would suggest, it's a parody of Judd Apatow's brand of comedy movies. The movie was shit, don't get me wrong, but it did get me to laugh twice I think and all things considered, that should be considered a success.

The problem with the movie (and there are lots) is that it was set up to fail. Parody movies by themselves are tough enough to pull off, relying 99% on sight gags and slapstick humour. Scary Movie, for example, I thought was good moreso for how well it weaved in several horror plot lines together rather than just rely on the gags. And if we're talking about gags, then Top Secret! would be my favourite movie for that, right up there with my favourite comedy movies.

What makes it more difficult for T41YOVWKUSMAFSAI is that parodies of comedies are even tougher to pull off. You're trying to make comedies out of comedies, trying to outdo the original material, which in most cases is near impossible. It's not funny when you try to parody better comedies.

There's really no need to go through the story. Essentially, they took all of the Apatow related movies, put them through a blender and slapped it on to a DVD. The result is horrifying.

I think the only redeeming quality of the movie are a few of the actors and their imitations. Notably, the guy who imitates Jonah Hill and the dude who did Seth Rogen were pretty spot on with their imitations, from their voices to their mannerisms.

Like I said, the movie did elicit laughter from me on two occasions, so take it for what it is. If you decide to rent (or God forbid, buy) this movie, you pretty much know what you're getting into. T41YOVWKUSMAFSAI is a bad movie and more often than not, you'll laugh at it and not with it. Later geeks!