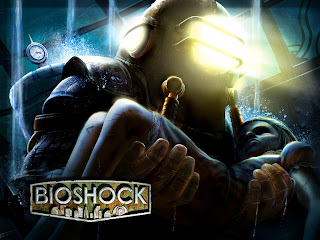 Up until now, I don't think I had an official favourite game for the Xbox 360. Of the games I've played so far, I've loved few of them, liked most of them... and well, then there was Dead Rising. I guess the closest to a favourite would be GTA IV. I know I'm 2 years behind the curve, but now having played and completed Bioshock, it is easily my favourite game on the Xbox 360.

When the game first came out, my roommate at the time purchased it on release and I was pretty disinterested. I saw all the ads and stuff, but they never piqued my interest. I think it was all due to the design and look of the Big Daddy character. I thought that you would be playing as a Big Daddy and because I didn't like the look, it turned me off. But those were the days before I owned an Xbox.

2 years later and things turned out differently. I credit my dad actually for triggering my interest. You see, his friends at work talk to him about gaming and keep him up on what's going on (trivia note: these guys gave me and lent me half of the games that I've played). One of the dude's favourite games is Bioshock and so my dad was asking me about it; whether I knew it was any good. I decided to give it a second viewing and saw that it was one of the highest rated games on Metacritic. I read some of the reviews and watched the video review on Gametrailers and learned that you DON'T play as a Big Daddy (well...). I was sold, they totally changed my mind.

My dad's friend Ian lent me the game and I finished it this past week and I loved it. The game successfully merges an art deco visual style with the horror genre. I was really not expecting this to be a creepy game but it was (although it hardly got me with jump scares, unlike Dead Space).

In Bioshock, you play as a man named Jack who happens to be in a plane that crashes in the middle of the Atlantic. Lo and behold, it lands near a lighthouse in the middle of the ocean that doubles as an entrance to an underwater city called Rapture. While in the city, Jack is aided by a mysterious man named Atlas who leads Jack around via radio messages. Eventually, Atlas convinces Jack to kill a man named Andrew Ryan... the creator of Rapture. But will it really be the end?

What really makes Bioshock great is this colourful story, filled with suspense and all the twists and turns. The game starts off pretty linear but does eventually take a few turns to spice things up. All the swerves are pretty predictable and it even gives you clues to what will eventually happen but the game executes them so well that they can be forgiven. As you wander through the hallways and corridors of Rapture, you'll find audio recordings that help flesh out the history and background of the city and its former inhabitants. 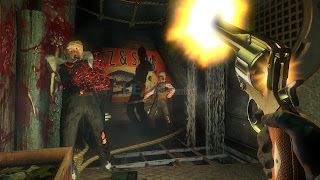 The game is a first person shooter that incorporates some elements from RPGs. Basically, you have an array of weapons at your disposal (guns, crossbow, chemical thrower, etc) but you're also armed with a variety of Plasmids (or spells) to help you in your adventure. The Plasmids are fine but in all honesty, I hardly ever used them. The machine gun and pistol were my best friends in my journey.

Rapture is filled with many different inhabitants. The main enemies you'll come across are characters called Splicers, who were at one point human, but through genetic experimentations, have become more animal than human (sort of zombie like creatures). Some will arm themselves with weapons while others will use their own powers. In addition, you'll encounter the aforementioned Big Daddy's (giant robots) who defend these young girls called Little Sisters, who harvest a material called ADAM from the dead Splicers. It's your duty to harvest or save (you're given the choice) the Sisters but not before you take down their protectors. Depending on which you choose to do, the Sister will give you a certain amount of ADAM which you can use to further upgrade your stats or abilities.

As the game takes place in the 1960s, the art deco style is a perfect and unique way to portray Rapture. Because of years of poor maintenance due to the humans becoming Splicers, Rapture has become an uninhabitable and dilapidated city. It all adds to the creepiness. There's nothing more chilling than walking down an empty hallway and hearing the song "Jesus Loves Me" sung by the Splicers, getting louder and louder as you walk through.

Anyhow, much love to this game. The only complaint I have is the lack of replayability. I think they're trying to fix that in Bioshock 2, coming out early next year and I simply can't wait.

If you have an Xbox 360 or PS3 chances are good that you played this already, but if you haven't, check it out if you can. It comes recommended highly by The Lam. Later geeks!

Mike said…
Bioshock is a classic that will be talked about for years, glad you finally discovered it. While not as original as Bioshock, if you liked that try Batman Arkham Asylum it has a very similar feel to it.
October 10, 2009 at 7:03 PM