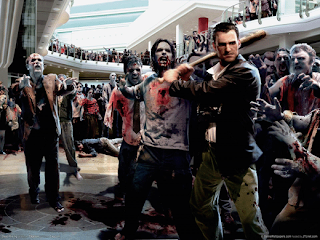 Well, fuck! Why not!

I actually wanted to review this while I was mid-game, during the peak of my anger. Cooler heads prevailed and I decided to wait it out until I actually finished it.

This was such a huge disappointment mainly because I was looking so forward to it. I mean, it's basically a Dawn of the Dead game; you're stuck in a mall amongst a horde of zombies with everything in the shopping mall at your disposal, how could this not rule? It's a dream come true... or so I thought.

You play as Frank West, a photojournalist who's hoping to be the first to get the scoop on the hottest story in history. After flying into town on a helicopter, he is ordered to land at a local shopping mall where he tries to unravel the mystery of the undead outbreak. Through your adventure you'll meet various government agents, scared survivors and loony psychopaths.

The game plays out as a third person action/adventure. Your main goal is to follow the case files which maps the main story of the game. Completing these case files reveals more about the mystery behind the zombie outbreak. Every now and then, you'll get calls on your radio from your good friend Otis about certain scoops that you might want to check out. These scoops lead to either survivors in trouble or psychopaths who have gone nutty amidst the zombie invasion. However, scoops are optional, and you can skip out on them willingly to focus on your case files.

I'll start off with the good (it's a shorter list). The design of the mall is really well done, from the variety of different stores to all the details within each store. Capcom did a really good job making it feel like you're in a mall complete with mall-type music. The variety of weapons at your disposal is also a plus. There's all the usual ones that you'd expect like handguns, machineguns and rifles, but being in a mall, you also get to play with other random things like lawnmowers, bowling balls and parasols, just to name a few. The amount and variety of weapons never runs short and at least in this sense, never gets boring.

Now for the bad parts.

Timed scenarios. The whole game is based on a 72 hour story (it converts to 6 hours realtime). You can only complete the case files during certain times, and if you find that your low on time to do your scoops, then you'll have to forfeit those. This is frustrating for gamers who like to explore their environments before they tackle down missions. I hardly got a chance to explore any of the stores unless I was required to for a mission. I had to miss about 60% of the scoop missions because there was just not enough time. I wish there were an option to play a version without a timer, where you can complete the missions at your own pacing.

Poor AI. When you're not completing case files, 90% of your missions are to rescue survivors hiding inside the mall. Once they join your party, they completely have a mind of their own. All you can do is arm them with a weapon (maybe) and tell them to follow you. Often times they'll do their own thing, fight when they want to fight, stop when they don't want to go. It's very frustrating for you because you only have a limited amount of time that you can devote to these survivors. Often times they'll get themselves killed and you'll have to restart over and over. This is by far the most frustrating part of the game for me. At one time I almost hurled the controller at our TV.

Save system. The save system is primitive. You're only allowed one save slot. That doesn't really help in a game where all your missions are timed. Essentially, you can fuck yourself over if you happen to save before you realize that you don't have enough time to finish the next mission. Multiple save slots would have been helpful.

Controller scheme. The default controls in the game were not optimal. You'd be using the opposite trigger buttons to aim with your weapon and to aim with your camera. Allowing an option to customize the mapping of the buttons would have fixed this.

Lastly, and more of a minor issue is the tiny onscreen text during dialogues. Not all of the dialogue is accompanied by voiceovers, so you'd have to quickly read the tiny text that would flyby.

I can only hope that they fix these issues for the sequel due later this year. But even then, I feel hard pressed to purchase it after this dismal experience. We'll have to see how that pans out. Later geeks!

That was some nasty ass s@#t in this post, loved it! I saw a demo playthrough by VGGameplay on Dead Rising and it looked pretty "stock" for lack of better wording.

I also wanted to give you the heads up on a new blog of mine called 8-Bit Memoirs 2.0. The old blog is getting a bit too spammy with ads and whatnot so I'm creating a mirror channel free of ads and sponsored'ness, please check it out if you get a chance!