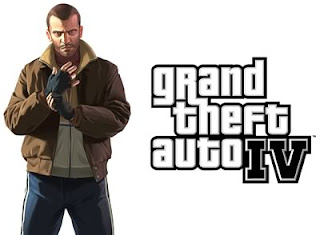 (Author's Note: this game was completed 2 weeks ago, pre-fasting!).

GTAIV is the shit. It took near 70 hours to do it, but I finally did it: I achieved 100% game completion. There were some tasks that were so frustrating that I wanted to pull out my hair at times (the 200 pigeons, for those in the know). That being said, the times of joy greatly outweighed the times of frustrations.

My only real complaint about the game is that the difficulty is a bit too easy. That is, all the story related missions (which doesn't include the afforementioned pigeons). The missions don't vary too much from the standard capturing & delivering something, assassinating someone or a combination of the two. Add auto-aiming into your controls and the whole process becomes cake. Even my sister was saying to me, "I don't hear much yelling or swearing from you, this game must be too easy". I should add that she takes joy in seeing me suffer through gaming (side note: in this case Dead Rising would be her favourite).

Honestly, if I were to write everything that I liked in this game, it would have to span over 10 posts or something ridiculous. So instead of boring you with so many fine details, I'm just going to list my 3 favourite things about the game.

1. The City Design - When Liberty City first loaded up, I was taken aback by how good it looked. It was so lively and atmospheric, it reminded me what it felt like to be in New York City. Basically they laid out the city in a similar fashion as NYC, albeit a truncated version. The boroughs that you explore in this game were designed almost identically as their reality counterparts, ie. Broker (Brooklyn), Bohan (Bronx), Dukes (Queens), Algonquin (Manhattan), and even Alderney (New Jersey). They even include many of the sites that you'd find in New York, ie. Middle Park (Central Park), Chinatown, the Statue of Happiness (Liberty), just to name a few. All in all, they add up to give a real feeling to the game. The city is full of life, where the streets are crowded with traffic during the day to the quieter nights, where Liberty City's skyline becomes more prominent. Simply beautiful.

2. The Story - What was great about the story was how it played out so much like a movie. Credit must be given to the direction as well. The opening sequence in the game says it all; it's something you would expect from the opening in a crime and/or action movie. Instead of being a typical GTA-rise to power story, GTAIV opts to keep Niko, our protagonist, more humble through his encounters with Liberty City's underbelly. Yes, he gets more and more money as the game progresses but he doesn't care about power or any of that; all he wants is to live a free life in America.

3. The Characters - The looks, mannerisms and voices of the characters is what truly brings the game to life. Throughout the game you'll meet a flurry of characters all unique and distinct from each other; characters even have their own gait! My favourite characters (besides Niko) have to be Roman, Niko's fat and lovable Russian cousin, and Little Jacob, the pot smoking, pot dealing rastafarian. Both of these NPC's are a joy to have in your company and the dialogue they exchange with Niko is priceless. Aside from all the main and supporting characters, careful design was also given to all the pedestrians and civilians throughout Liberty City; all with their own attitudes and dialogues (they hate it when you steal their cars, but they turn into chicken-shit once you fire a bullet into the air... or into their arm).

Anyhow, there's a million other things I love about the game but if I talked about them, this post would become too long. Yes, probably too short of a review for a game so jampacked, so let's just say it rules!!! Later geeks!

Jeffrey said…
I like this game, but I don't love it, something feels a bit too big for me.

Oblivion was more my style, but I've always been more into swords than guns.

Mike said…
Congrats on the 100%, getting those pigeons is tedious. So will you be trying the Downloadable content such as the existing Lost & the Damned or perhaps the new upcoming (and i kid u not its called this) the ballad of gay tony?
May 27, 2009 at 11:58 PM

The Lam said…
@Jeffrey:
I loved it compared to GTA: SA, which I found too big, with too many open spaces with nothing in it. I liked the way they designed Liberty City in that it was bigger in content, but you never had to spend 20 minutes driving from one end to another.

@Dave:
Thanks dude, usually I don't go for the 100% completions in any game, but I felt compelled to for this.

@Mike:
Thanks Mike. Yes, those pigeons and stunt jumps too, were the only things that had me ripping my hair out. I'm going to take a break from GTAIV for now, but yes, eventually I will get the Lost & the Damned, it looks interesting storywise. I never even heard of the "Ballad of Gay Tony"!!! Sounds outrageous! I'll have to see what the reviews say for that one.
May 28, 2009 at 1:32 AM