The Hateful Eight is Quentin Tarantino’s latest masterpiece and is somewhat more akin to chamber theater.

The movie opens off following a stagecoach that’s rushing through the harsh winter terrain avoiding a torrential blizzard that’s on its tail.  Within the coach is a rugged bearded outlaw named John Ruth, also known as the Hangman, and his captive, a feisty woman named Daisy.  An route to collect his bounty, they come across Major Marquis Warren, another bounty hunter, and Chris Mannix, who are stranded in the cold and request a ride from John Ruth.  Not knowing if they can be trusted, Ruth grudgingly gives them a ride, keeping his fingers hovering closely over the triggers of his firearms.  As the blizzard becomes more perilous, the band arrives at a lodge, where they meet the remaining eight.  However, everyone looks a little too greasy, and smells a little bit too much like gunpowder.  Who can be trusted?  It’s not too long after their arrival that the Hangman realizes this and that there may be a ploy to free the captive Ms. Daisy.  Everyone is on the edge.  But who will make it out alive?

Clocking at over 3 hours (including an intermission), the Hateful Eight is quite a long journey.  And as it is similar to a chamber piece, the majority of the time is spent in dialogue.  It’s not until the last 40 minutes or so that moves are made and the action happens.  But it’s not a movie about action anyways.  It’s a methodical piece that slowly unravels the layers to its mystery.  This is a type of movie where the terms ‘good guy’ and ‘bad guy’ are all relative.  No one is truly good, everyone is just looking out for themselves.  It’s just a matter of who is least bad amongst these outlaws.  One minute you’re pulling for one character, and the next minute, another.  Your emotions move along with the story.

I was listening to Tarantino’s interview on Howard Stern just before Christmas.  He described enjoying old western shows, notably the Virginian, and especially episodes where an unknown figure shows up in town.   Up until the end, you never know if they stranger is a good or bad person.  This inspired his Hateful 8.  He wanted to make a movie that only starred these unknown and foreboding strangers.  What a fucking genius! 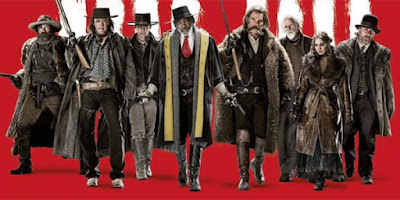 Tarantino as always crafts intriguing dialogue between his players.  And fortunately, he chose strong players to fill out his script.  Notably for me, Walton Goggins was the standout as the Chris Mannix.  More so than Kurt Russell (who seems to be an extension of his character in Bone Tomahawk) and Samuel L. Jackson who both always shine in their roles, he fully portrayed the untrusting mysterious stranger up until the end.

It’s an engaging story and worth to see, as all Tarantino movies are.  However, I don’t feel like it’s his best movie if only for the reason of its long runtime which I feel could have been tightened up and condensed.

Tarantino has been imploring the public to see the film in 70 mm if possible and I find that interesting as the movie really only has two settings (a carriage and the lodge) and doesn’t really take advantage of vast landscapes which would look beautiful in 70 mm.  To that, I’d say the 70 mm is not necessary, just so long as you get to see the movie at all!

It’s an easy recommend!  Until next time, later geeks!