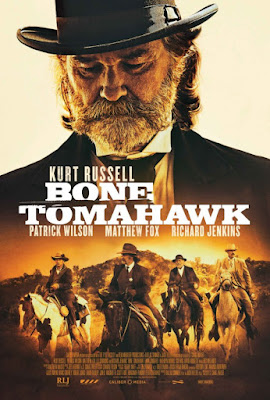 Bone Tomahawk takes place in the 1890s in a small frontier town called Bright Hope.  After the arrival of a mysterious drifter, the town is stalked by shadowy, primitive Native American characters.  They murder a local farmhand and kidnap the drifter, the female doctor and a deputy.  The Sheriff is advised by a friendly Native American that the ones who conducted the kidnapping and murder are not considered true Native Americans.  They are primitive cave dwellers referred to as troglodytes, known for their savagery, barbarism and cannibalistic tendencies.  The Sheriff assembles a team including an elderly deputy, an itchy fingered gunslinger and a civilian townsman (husband of the kidnapped doctor) to track down the troglodytes and save the townsfolk.  Together, they head out to face the dangers of the wild where the chances of survival are fleeting.

Bone Tomahawk is a perfect merger of the western and cannibal-horror genres.  Clocking at 132 minutes, it runs a bit longer than some might expect for this type of movie.  I’ve described the movie to friends as a slow burn.  For the first hour and a half, the pace is slow more akin to a western film.  Time is spent with the characters, building and journeying with them.  There’s a looming sense of dread the further our characters go on their journey.  It’s not until the last 40 minutes or so that the movie kicks it into high gear and plunges into its horror side.  And it is unrelenting!  The movie is vicious and brutal with its killings.  Because we’re dealing with primitives, their savagery knows no bounds.

And both tempos, that of the western and the horror sides, are the keys to its success.  The western side builds our emotions and the horror provides the payoff.  I guess my only gripe is that with its longer running time, perhaps some scenes on the western front could have been trimmed for a more concise 90 to 100 minute hit. 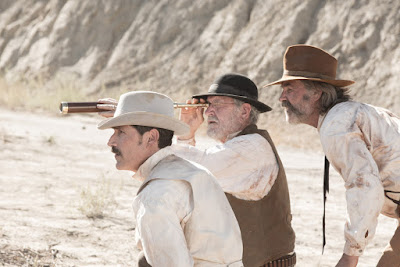 Bone Tomahawk was helmed and written by first time director, S. Craig Zahler.  According to his IMDB credentials, he has only worked on a limited number of projects, none of them high profile.  Yet, he was able to secure funds to bring this script to life, and with a star studded cast on top!  The film is filled with talented performers including Kurt Russell, Patrick Wilson, Richard Jenkins and Matthew Fox.  In more limited roles but doing exactly what’s needed is David Arquette, who plays the drifter, and horror favourite Sid Haig, who has a smaller cameo type role.  The film is working on a lower budget, no doubt, but still, you can feel those dollars stretech!

It’s worth a watch if you’re a fan of either genres.  This may be considered a preview to Kurt Russell’s other big western due later this year (Tarantino’s Hateful 8), and if he plays it like how he plays it here, we’re in for a treat!  Until next time, later geeks!