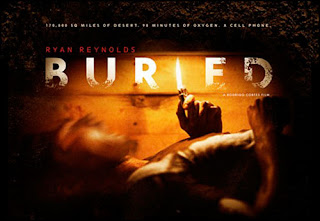 So it was Friday night. I was hanging out with my friend Zoro and we were trying to figure out something to do after dinner. We decided the best course of action was to check out a film at the local cinemas. This in itself proved to be a challenge, for you see, the only movies playing at the theaters were either shit or were movies that either of us had already seen (not necessarily meaning those movies were any good either). So our choices boiled down to The Town and Buried. Both garnered generally good reviews. Both had pros and cons going for it. The Town seemed to be an action filled drama, but we figured the story would be not unlike anything we've seen before. Buried, on the other hand, was a unique story that took place in its entirety within a coffin. On the downside, I was tired and sleepy after a long day of work and pumpkin carving (also at work). So we weighed it out, and of course, Buried won. We figured it was an indie movie that not many people have seen, so it was probably better to support the smaller film, and spread the word to friends.

So despite my tiredness and its runtime of 90 minutes, I managed to stay awake and conscious throughout the whole movie. I think that's a testament to some gripping film making and story telling (note: in comparison, I fell asleep at the theaters when I watched Live Free or Die Hard and Sweeny Todd).

Buried tells the story of, Paul Conroy, an American truck driver hired for work in Iraq. On one particular day, his convoy is attacked by a group of terrorists with his colleagues all murdered. For some reason, they spare Conroy's life, but they kidnap him, and bury him alive in a coffin. He is armed with nothing except a lighter, a flashlight and a Blackberry phone. It's here that the movie takes place in its entirety.

Much like Frozen, this is another movie that takes advantage of the minimalist approach to film making. Because of its unique premise, the success of the movie relies solely on two things: the performance by Ryan Reynolds and story telling. Watching the movie is like assembling a jigsaw puzzle; every time you fit in a little piece, you're filled with joy at the mystery that you're uncovering. It's similar in the movie, as we start off basically knowing nothing about what's going on, but we become more gripped with each little tidbit that's revealed via cell phone. The intrigue never lets up, ramping up and concluding with a tour de force of an ending.

Rodrigo Cortes, who has done only one other full length feature, succeeds in putting together this movie. The way he shoots, cuts and adds musical cues to the movie helps to create the mood and sets the stage for the forth coming reveals. The way he makes so much out of nothing is a testament to his skill as a film maker. Just as much respect goes to Reynolds who delivers a powerful performance, as the sole actor in the movie (minus the voice actors). He bears all the weight of the movie; we laugh when he goes nuts, we despair in his sadness. Really, I never thought much of him as an actor, he's never done anything that blew me away, but he won me over with this one.

If you want to see something unique, give this movie a try. On the outset, it seems pretty daunting heading into a 90 minute movie that takes place only in one scene, but it never disappoints and will keep you hooked. Til next time, later geeks!