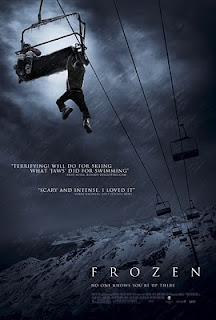 I've always loved movies that dealt with isolation. I think the first movie that wowed me this way was Hitchcock's Rear Window. To a lesser extent, I also enjoyed Phone Booth a few years ago. In the next little while, we're getting Buried, dealing with a man buried in a coffin alive and Alfonso Cuaron's Gravity, dealing with a man trapped in space. I guess I enjoy that minimalist approach to film making. How much can you do with so little?

Which brings us to Frozen, released earlier this year in theaters. Frozen follows three college students as they hit the ski slopes during a school break. Low on cash, they bribe one of the ski lift operators to let them on. But the fun and games only last so long for these friends. That night, they are mistakenly left in the middle of the lift, abandoned and forgotten. Luck for them further diminishes as the hills are closed for the week due to the bad weather. Will they ever get off the hill or will they succumb to the cold, leaving them... FROZEN!

I loved this movie. I couldn't help but feel dread as we watched the characters realize their situation — they were stuck. For those who've been skiing, I think you can relate to that feeling on some degree, when the lift momentarily stops, leaving you hanging for who knows how long. Or even the few times that that's happened to me on the elevator; that dread overcomes you because you feel helpless. I think that connection is really helped me enjoy this movie.

With such a minimal setting, movies like this have to rely more on story and performances rather than a high and lavish production. I think the movie succeeds this way as well, creating such gripping suspense in its story. Each second is another wasted moment and you never know whether the characters will make it. The performances were quite strong too, particularly that of Shawn Ashmore, who I know nothing of except that he was Ice Man in the X-Men movies (or maybe he caused the ice storm in this movie? Sonovabitch.)

This is another thumbs up for director Adam Green who did the cult favourite Hatchet, probably one of the best slashers of the past decade. Green improves upon his style, showing us that he's a lot more than gore and cheap thrills. He's able to build character and craft a suspenseful story, while connecting to his audience.

If you can, I say check this baby out. Til next time, later geeks!