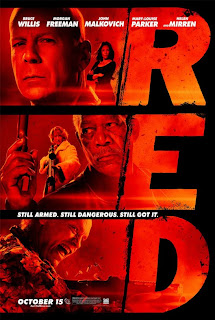 I love Warren Ellis' work in comics. I think he's a brilliant writer especially his work on Planetary, The Authority and The Astonishing X-Men. Most of the titles that I've read from him dealt with superheroes or at least some in that realm of reality. So when I first heard about Red, I was kinda surprised in that I've never read any of his "real world" material. But anyhow.
Red follows a group of retired CIA agents as they flee from government agents who are chasing them for some unknown reason. The retirees are a unique group and in fact are labeled as R.E.D. because they are "Retired and Extremely Dangerous". The team is led by Frank Moses (Bruce Willis) who is a retired ex-black ops agent. He swoons a pension officer (Mary Louise Parker) who is then whisked away into the James Bond-ian like adventure that she's always dreamed of. They're joined by a bevy of retirees as they balance fleeing with crime solving as they try to crack the mystery behind their being chased.

The movie is tonally similar to Kick-Ass (in fact, both were filmed in Toronto!). It's in a pseudo-real world, where all the background players and civilians are normal, but the main actors are outright cartoony. What would otherwise be a serious story of retirees on a mission is parsed with comedy throughout, giving it this light-hearted feel... with blood and bullets. I haven't read the comics, but from what I can gather, the tone in the books is radically different from the movie. It's more of a serious story, whereas the movie is played for its comedy bits. It's like two different mediums using the same premise and producing two different results.

Helen Mirren is pretty damn awesome in the role as Victoria, a once cold-blooded killer. Mirren, who normally exudes with elegance, is juxtaposed with her blood thirsty trigger finger. There is just something hilarious about seeing her clad in arctic camo gear, wielding a sniper rifle. But really, as if I really needed to say it, John Malkovich steals the show. Anytime they focused too long on another character, I wanted Malkovich back on the screen. He was just damn hilarious playing the wacky old paranoid character. Bruce Willis probably has the most straight-up role as far as the main cast goes, and he does what he does. I was kind of disappointed with Mary-Louise Parker, who is supposed to be excited that she's on this wild adventure, but I just never bought it. I think Cameron Diaz did a better job playing a similar kind of character from Knight and Day earlier this summer.

The movie was entertaining, and in the end, was good, but didn't reach levels of greatness. The casting of such talented older actors is superb and each does great with what they are given. I think the problem is that they weren't given much. However, it's still worth a DVD rent at best, when it comes out. Til next time, later geeks!

the kuster said…
I just watched this yesterday and thought to myself - I wonder what Jeff thought. Funny, because as I came to reflect upon this, I realized none of my immediate friends and I watch movies anymore - so obviously, when it comes to movies, I go to you.

Anyways, I never saw Kick-Ass because I started reading the graphic novel and decided I didn't like the title character but if its tonally similar to Red, I may give it a try.

My friend and I were having a really rough day which is mainly the reason we went to the theatre, thinking a bit of Bruce Willis and explosions might be mind-numbingly enough. I don't remember the last time I had so much fun with Bruce Willis! (Maybe Lucky Number Sleven?) I enjoyed it immensely - and you're right, John Malkovich was a brilliantly neurotic character; I bet he's like that in real life :P