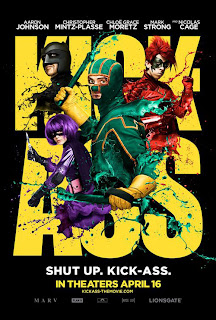 I first heard of Kick-Ass around the Fall of 2008 when they began filming shots around Toronto. At the time, the comic book series was only at issue 3 so I didn't know too much about the story but was surprised that they were working on a movie adaptation so quickly. I didn't really follow the production news behind the movie until the momentum from geekdom began to build late last year when it was screened at Harry Knowles' Butt-Numb-A-Thon festival. Needless to say, it garnered rave reviews from the geeks in attendance. The advance screenings in January also received the same kind of positive responses. One thing seemed unanimous: the character Hit-Girl was the clear standout. Having watched it now, I can fully agree, Hit-Girl was a hit!

The movie itself follows a teenager named Dave Lizewski who considers himself mundane amongst all the kinds of characters he encounters in high school. He's a big comic book nerd and wonders why no one in real life attempts at being a superhero. After ordering a wetsuit off of eBay, he creates his own superhero persona dubbed Kick-Ass. He tries and fails at fighting crime until one day he successfully fends off a gang of miscreants which a bystander films and uploads to Youtube. He becomes an online sensation and a true hero to the people of New York. As Kick-Ass, he also meets a bevy of other heroes and together they try to take down the gangs that dwell in their city.

So this past week I spent some time reading the Kick-Ass comic series just to get myself up to date. It's only at issue 8 and each one is a pretty quick read at that. I'm happy to say that the movie manages to stay faithful to the comic except for a few details. They keep the spirit of the comics which I think will please fans of the source material.

One of my favourite moments during the movie didn't have too much to do with the movie at all.
There was a scene where some of the characters wanted to go see a movie, so they drive up to the Scotiabank Theater in downtown Toronto... the theater at which I was watching the movie. The crowd erupted in applause. It was pretty awesome and nearly brought a tear to my eye. Torontorians love Toronto.

Actors across the board really brought this movie to life. Aaron Johnson, who I've never heard of before this, really embodies the character of Dave Lizewski/Kick-Ass, bringing in all the nuances of a typical teenager. Nicolas Cage as the Batman-like Big Daddy owns in his role too. It's such a contrast seeing him playing a sweet, charming and seemingly harmless father during the day and become this bad-ass superhero at night. Playing off of his Batman-like appearance, he'll have you roaring with laughter as he emulates the Adam West Batman whenever he dawns the cape and cowl. The more I see of Mark Strong, the more I love him as the head bad guy. I don't think I've seen a movie he was in where he didn't play a bad guy, which is fine because he seems like a ruthless kind of guy. Finally, Chloe Mortez Grace as Hit Girl. She just stole the show. I found that every time she was offscreen, I wanted her to be back onscreen; that's how well she commanded her role. She was funny at all the right moments and kicked ass whenever she had to... kick ass. I don't think I've seen an audience applause so much for a character. 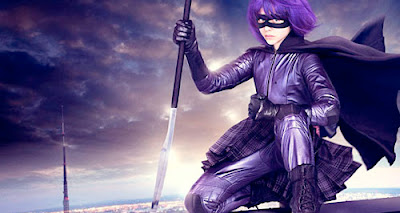 Hit Girl packs a punch!
The movie itself went through quite the journey before they even started shooting it. The director, Matthew Vaughn, shopped the script around at a bunch of the big movie studios, but none of them would pick it up because of the risky content. A lot of the controversy surrounded Hit Girl, an 11 year old who swears like a sailor and slashes like a killer, which is I guess unconventional by Hollywood standards. Studios wanted to either tone down the violence, remove Hit Girl or make her older and more marketable. Vaughn refused to budge and demanded that everything should stay intact. And so none of the big companies ended up picking up the movie leaving Vaughn and his associates to finance the movie independently.

My only true gripe with the movie was how it was shot in Toronto but was called New York. It's almost a joke. The Toronto skyline is clearly not the New York skyline. Why bother? I think I'm going to write a mini rant tomorrow because I was talking to a friend earlier tonight about it and I think it's a worthwhile rant.

Anyhow, this was a great movie and a perfect lead-in to the summer blockbuster season which is right around the corner. But I should warn you, this is definitely not one for the kids! Til next time, later geeks!

Below is the red-band trailer for Hit-Girl. Uh-oh, ear muffs!