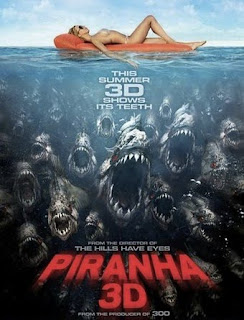 From the opening scene of Piranha 3D, you know a statement is being made. They had the smarts to hire Hooper (Richard Dreyfuss, I believe is his civilian name) to play the opening kill — a staple in horror flicks. Yes, Hooper may have survived Jaws, but he certainly didn't survive Piranha 3D. And so the standards were raised after the first 5 minutes. And if that wasn't enough, the jabs really started when they released the poster (to the left) even before the first minute graced the screen.

But obviously they weren't trying to top Jaws, a cinematic masterpiece all things considered. No, Alex Aja isn't that stupid being an esteemed director himself. Instead, he tries to take the spirit of the original Piranha and mix it up with an over-the-top flavouring, nearing Scary Movie-levels of ridiculousness. Thinking about it, this movie was akin to the B-movie qualities of Eight Legged Freaks, which was surprisingly decent.

The movie takes place at a lake side town by Lake Victoria in Arizona. An earthquake breaks open the lake floor and out comes a horde of deadly prehistoric piranhas (I'm tempted to say a school of piranhas, but that makes them sound like wussy fishes). Unfortunately for this small town, the piranhas are hungry for meat. Making matters worse, it's spring break and the lake is flooded with drunken and debaucherous students. How will the town survive this epidemic of killer fishes?

Well, the short answer is that most of them don't. And I'm not kidding, lots of people die! I might be wrong, but this movie could have had the highest kill count for all the horror movies I've ever seen. So much blood, so much limbs, so much gore! For a gorehound (like myself) this was bliss. For the squeamish, this was hell. But what this movie reinforced for me was my love for prosthetics and practical special effects. Not that it's any more real, but it's just more fun seeing physical fake-limbs being thrown around on screen rather than a CG version. Granted, there was a fair amount of CG in the movie, but it more than balanced out in the end.

The casting for this movie was pretty amazing, filled with an ensemble cast, many who've hardly graced the silver screen nowadays. First there's Elisabeth Shue as the town's sheriff, who looks stunning at the age of 46, if Wikipedia is correct (and yah, I had a crush on her when I was young). Ving Rhames, who reprises his role as the big black tough guy-bad ass. Richard Dreyfuss, I already mentioned, but the cherry on top is the casting of DOC! Yes, that's right DOC! Uhh Jeff, which Doc? DOC BROWN! YES THAT DOC! DOC BROWN AND HIS DELOREAN! This movie is a reunion of sorts, with the reuniting of Elisabeth Shue and Doc Brown, a la Back to the Future Part II (note: my brain nearly overloaded as I realized this while I was watching the movie).

The movie itself is decent. I didn't love it as much as the original Piranha, but I did enjoy it heaps more than Piranha II which I still can't believe that James Cameron did. Besides the zany and quantity of kills, I just never felt the hook, maybe because of such a large cast that kept me from connecting to anyone. One thing that I was disappointed about was the piranha sounds that they made in the original movies. I was hoping that these piranhas would have that same campy but cheesy sound. As for Alex Aja, I'd file this under his 'good' folder. His first hit Haute Tension is still one of my favourite horror flicks, creating such gripping suspense with hardly any dialogue. Then there was The Hills Have Eyes remake which was a tour de force in horror. But then he limped with Mirrors. Well, I'm glad Piranha 3D is back on the right track even if it wasn't a blow away hit.

Lastly, I want to touch on the 3D. I know there is sort of an internet fanboy backlash against the medium. I can't say I'm for or against the 3D, I enjoy it when it's done good. But for this movie, there was not one minute that I thought the 3D added any enjoyment to my viewing. I've seen a handful of movies in 3D, and still, the only ones where I thought it was good was Avatar and strangely enough, My Bloody Valentine 3D.

Anyhow, this is worth a rent at the very least. If you're into the whole 3D thing, then I suppose a theatrical viewing wouldn't hurt. But I'd say walk don't run, to see it. Or should I say swim? Til next time, later geeks!