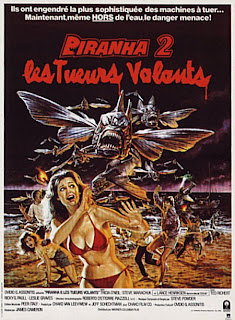 In celebration of Avatar becoming the largest (unadjusted) grossing movie of all time, I thought I'd go back and review one of James Cameron's earlier works. It's time again to get into the wayback machine. Let's return to 1981; a time before CG in movies, before Aliens and Terminators... to a time when it was possible for James Cameron to make shitty movies. Unfathomable!

I watched the original Piranha about 3 years ago and I loved it. It was the exact balance of cheekiness and horror that you'd want in a low budget horror flick. A movie trying to capitalize on the fame of Jaws except with killer piranhas, how could it be bad? It was great. This sequel? It was not.

A big problem with the movie was the incoherent story. The way they cut the film made it hard to follow the main story and all the side stories of the supporting characters. On top of that, random characters are introduced, disappear and then reappear much later. As far as I can remember (yesterday), the movie takes place on a Caribbean resort with killer piranhas lurking in the seas. There are a bunch of characters and they get eaten by them. The end.

If you're a fan of B-movies and bad horror movies, then Piranha 2 would probably be passable. That said, I love bad movies and even I had a hard time liking this movie. I would not put my friends through this unless it was to prove that James Cameron at one time did make bad movies. Aside from the confusing storyline and lack of a climax (almost needed movies like this), I just hated that the piranhas could fly. You read that right. Flying fish! It was just ridiculous and probably too over-the-top. I can believe in killer fishes but not flying fishes.

The movie is gory so it has that going for it, but it is certainly not scary. The only scene I found really scary was actually a scene played for laughs at the beginning. One of the characters holds up a live fish to a woman's face while she's sleeping, only to stare at it as she wakes. This frightened me. My close friends will tell you that fish is one of my biggest fears. I think I would shit myself if someone did that to me.

Anyhow, it's 2 in the morning now. I should sleep, but before I leave you, I made an animated gif of James Cameron laughing at us because he's rich and we're not. Later geeks!