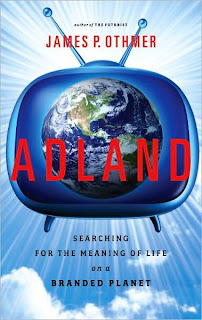 Continuing with my Campaign of Cheapness, I finished reading Adland by James P. Othmer this past week at Chapters. I picked it up not knowing anything about it but I knew two things: a.) I wanted to read a book that was somewhat related to business and/or economics and b.) it was on a display shelf, so I figured it had some sort of notoriety.

Last year on a trip to New York, me and my friends took a ferry tour of the upper bay in Manhattan. The tour was led by a fast-talking witty young man, chock full of jokes and fun facts about the Big Apple. One of his trivia questions to us was, "what's New York City's biggest industry?". We threw out guesses and if I recall correctly, we guessed the top 2nd to 5th biggest ones, but we couldn't figure out that 1st one. After leaving us stumped for a while, he finally revealed that, yes, the advertising industry was the largest.

Those of you who know me or have been reading my blog for a while know that I'm an engineering grad, so the advertising field is something I'm totally unfamiliar with. After reading this book, I feel a bit more learned about this field and for sure, I feel more respect for those people in this field of work.

Ads are an interesting thing. To me, they're the perfect blend between art and business. If you bend too far in the direction of art, the purpose of trying to sell a product might get loss. However, bend too far in the direction of business, and you risk losing the viewer's interest. I think that's why my brain just shuts off whenever there's one of those paid advertisement's on TV; it just doesn't pique my interest in a creative way (Snuggie, I'm looking in your direction).

In Adland, Othmer attempts to paint a picture of the advertising industry; from the past to the present and with insight into the future of the industry. He shares with us his experience in the industry after having been there for several decades. Not knowing what to do at a young age, he sort of fell into the industry rather than choosing it. He first started out in a small company, but over decades, worked his way through some of the world's largest and reputed advertising firms (at the time). But a strange thing happened. After the year 2000 hit, the industry was turned on its head. Some of the world's largest ad firms, institutions in the industry, were dying out. These were firms that stood tall for decades on out, why would they die? The culprit: the internet. Old structures and old management just couldn't keep up with the digital direction that everyone else was going in. Nowadays, instead of large advertising agencies dominating the industry, it's now smaller and younger upstart agencies (dubbed Idea Factories) that are getting all the business. The traditional ways of doing advertising (TV, radio, print) wasn't cutting it anymore, and at these Idea Factories, there were less restrictions, allowing ideas that were outside of the box to hit the real world.

One of the biggest trends right now is the concept of viral marketing. It's an intriguing way of involving the audience or demographic in the advertising process. Think back to 2007, when the hype started building for the newest Batman movie, The Dark Knight, due for release the following summer. They had geeks scour the internet for fake websites leading to real world scavenger hunts to solve puzzles and dress in costume (as part of Joker's crew) before they hit the San Diego Comic-Con. They did similar things in key markets and actually my brother solved a puzzle and got to see a 15 minute secret screening a year before the movie was released (damn him! But I wasn't in Toronto at the time). And all of this non-traditional marketing was cleverly developed by a young freethinking company called 42 Entertainment.

A more recent example would be for the movie Paranormal Activity. Paramount only released this movie into a handful of theaters at first. They created an internet campaign, asking fans to "Demand It!" in their city and after I think 1 million fans demanded it, the movie would be receive a nationwide release. The hype built up by word of mouth and it did (or is doing) bonkers at the box office.

One of the stories that stood out for me was on his visit to this young and successful ad agency (I forget the name of the company). He had a discussion with one of the key creative members on what's the next big thing that they're trying to crack. Interestingly enough, the gentleman replied that they're trying to develop an advertising model within the game World of Warcraft (a game that I was addicted to for 2.5 years). They're looking for a way to integrate advertising within the game's seamless world. It's all speculation at this point and obviously from the player perspective, there would be a huge vocal backlash against such a doing, but having thought about it from the business standpoint, it does make sense. Here's a game that advertises 10 million active subscribers worldwide playing everyday, and not just for mere minutes, once you're in the game, you stay for hours.

I could go on and on, but that would defeat the purpose of reading the book. If you wanted a nice, humourous read on the advertising industry, you can't go wrong with Adland. It's a good read, especially for n00bs like me. Until next time, later geeks!