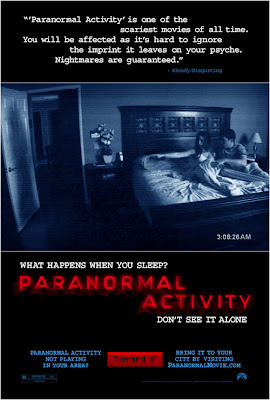 This weekend during dinner, my mom brought up that the famous Human Body exhibit was returning once again to the Ontario Science Center. She wanted to see it the last time it was in town but it was too packed with people for her liking. She talked about the different exhibits that they'd be showing much to our disgust. My dad replied with this: "Why would you pay to suffer?".

Indeed a good question, why would we pay to suffer?

That brings us to Paranormal Activity. The movie has been raved by both critics and fanboys alike. It's touted as the scariest movie of the past 10 years. High praise for this little indie film, but would it live up to those standards? Me and a few friends took on the challenge.

Paranormal Activity follows the 'found tape' genre of movies akin to The Blair Witch Project, The St. Francesville Experiment, [REC], etc. We watch recordings of a young couple, Micah and Katie, as they seek to discover an entity they believe to be haunting their house. In trying to unlock the mystery, they mic their home and record everything they can through their brand new digital video camera. We see what goes on during the day and the demonic things that go on at night. The best way to watch this movie is by going in knowing as little as possible, so that's all I'll say for the plot.

Instead of cheap jump scares that you'd find in conventional Hollywood horror movies, Activity opts for a more patient approach. We're given a slow build of strange events that grow more and more aggressive as the movie goes on. It's a more suspenseful and an effective way of playing with our minds. We know bad shit is eventually going to happen but we just don't know when or how. It's the anticipation that really makes it haunting for the viewers.

For me, the most frightening scenes were those that took place within the bedroom whenever the couple were sleeping. There's a huge sense of helplessness and vulnerability watching all these demonic occurrences happen unbeknownst to the couple.

Paramount Pictures picked up this movie after it screened a few festivals over the past 2 years. The story on Wikipedia of how the movie was constantly delayed but finally released is an interesting one (at one point, it involved Steven Spielberg of all people). They finally released it to select theaters at the end of this September and created an online campaign to allow fans to vote for the movie to play in their city. Toronto was one in a handful that were selected this past weekend. The campaign then evolved, citing that if they reached 1 million unique fans demanding the movie to be played, that it would receive the nationwide theatrical treatment. Well, it reached 1 million on the weekend so expect a full release soon! Couldn't come at a better time as Halloween is drawing near.

My cousin Kevin wrote me on Facebook saying he was looking forward to my post on hype vs. reality as it pertains to this movie. To that I say: the reality is, is that it lived up to the hype. Although I should add that I'm the absolute wrong guy to ask about this since I'm a sucker for horror.

Much like Drag Me To Hell, the whole experience was boosted by the enthusiastic sold out crowd at the theater I went to. There's nothing better than watching a horror movie in an auditorium full of people who will eat it up. The crowd laughed at all the funny parts and screamed at all the scary parts and didn't talk throughout the movie, like a well-behaved crowd. So if you folks were at the midnight screening on Friday at AMC Yonge and Dundas, I salute you.

In the end, the four of us that went had the piss scared out of us and that seemed like the general consensus with the crowd there that night, so that's a solid thumbs up. Looking back now, 2009 has been a pretty shitty year for movies in general, but at least the horror genre has been strong. Until next time, later geeks!

I have some cousins in the States, said it was overrated- just tired, old, cheap screams.

Anonymous said…
ooo...everyone's been saying this was a good movie. One of my friend's from work is still scared of it after seeing it last week xD;;;;

The Lam said…
Beka: I don't think it's your kinda movie at all, haha. If it scared a bunch of horror lovers, then I can't imagine the effects it would have on non-lovers.