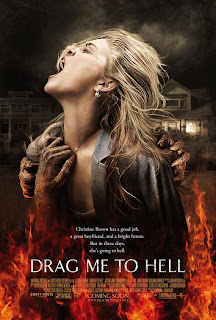 It's great to see Sam Raimi back in his form with his latest entry Drag Me To Hell. Simply glorious, it is a horror geek's dream. This is the Sam we all know and love from Evil Dead 2 and Army of Darkness, before he got all caught up in the comic book geek universe of Spider-Man. After 10 years (from the first time I watched Evil Dead 2), he has remained my favourite film director... although he did try my patience with Spider-Man 3. I know this euphoria that I'm feeling now will be short lived, as even as I type this review, Raimi is already at work on the pre-production of Spider-Man 4 (yay?).

So what is there to say about Drag Me To Hell? This is the way a summer movie should be, touching on all those senses that make movie going an actual experience. There were thrills, chills, laughs and cheers; the way things should be!

Drag Me To Hell tells a story of a young loan officer named Christine, who in an effort to advance her own career, has to turn down an old gypsy woman's request of a loan extension, thereby evicting the woman from her home. Needless to say, the grotesque old woman is not happy and curses Christine with a demon called the Lamia, who after three days of stalking and taunting, will come for her soul and well... drag her to hell! We follow Christine as she's terrorized and as she seeks of a way to rid herself of the cursed demon.

The movie was filled with tons of scares and lots of grossness. If you hate those jump-scare moments, then steer away, because there are tons of them in this movie. I'm still desensitized from them, but they are still fun to see if only to see everyone else's reactions. Most of them are pretty fun but some were ridiculous; I think the handkerchief was responsible for 2 jump-scares. Like I said, there's also a lot of grossness throughout the film. There's tons of sight gags, from oozing slime to creepy crawly bugs. You can't help but to dry heave during some of the scenes as poor Christine is physically tortured.

Amidst all the frights in the movie, there were also lots of moments of comedy. It was done perfectly to alleviate the tension between scenes and thankfully, it was never too over the top (well, except for one scene that was damn hilarious... bah-h-h-h-h! *wink*). If I had to rank it, I'd say it was funnier than Evil Dead 2 but less slapstick and over the top than Army of Darkness.

Alison Lohman does an exceptional job playing Christine. It's a role that required a high degree of boldness, playing someone being terrified to near loony at parts. She's a brave girl for enduring all the physical torture that Sam must have put her through. I can't count how many times something slimy and/or disgusting was thrown into her mouth. But my favourite scene of her's was one scene near the end that I thought really solidified her performance. It took place at a graveyard and I thought that it really channeled Bruce Campbell's performance from Evil Dead 2.

Justin Long plays her boyfriend Clay and I have to admit, I didn't hate him in this role; I'd even go as far as to say, I liked him in this role. I'm not a big Justin Long fan at all, but he does a fine job of playing the faithful boyfriend. He's the foundation in the relationship; even when Christine's chips are down, he's there to support her 100%. In a typical hollywood horror flick, he'd be the skeptical dick boyfriend who doesn't believe a single thing she says, but Raimi is smarter than that, and keeps him as partially skeptical, but mostly supportive. One thing that I thought was funny was how his office was littered with Apple products. I wonder if it was intentional.

What helped this movie experience was the enthusiastic audience that I saw this movie with. The theater was packed and throughout the movie, the audience reacted at all the right spots; there was laughter, cheers and screams (of course). I was saying to my friend afterwards, "I've never been to a movie that had this much applause throughout the movie". It really helped create an exhilarating movie-going experience, the way summer blockbusters should be.

I'm saddened that the movie is doing so poorly at the box office, despite almost unanimous critical acclaim (on RT, 156 positive reviews out of 168). I can't recommend the movie enough and hopefully if you do catch it, you'll get a theater with an excited audience which will surely help the experience.

Until next time! Later geeks!

(P.S. To my fellow Raimi-geeks. Rest assured, the beloved 1973 Oldsmobile Delta, otherwise known to us as "The Classic", makes it into more than a few scenes!!!)

Slapinions said…
I really want to see this movie, and so I didn't read any of this post in fear of spoilers. So if you could give me the shorthand - is it worth seeing?
June 13, 2009 at 9:42 PM