Disney buying Marvel Enterprises for a ton of cash! 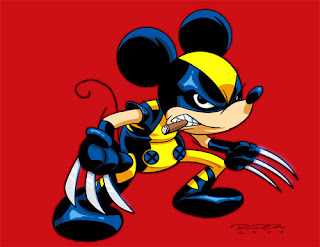 If you've been watching the business news or geek news the past 2 days, then you've probably heard: Disney is buying Marvel Enterprises. For how much? A whopping $4 billion (full story on CNN).

I seriously don't know what to think. A list of pro's and con's about the deal comes to mind. On the plus side, much like DC Comics being owned by Warner Bros., now Marvel has a huge financial backer for any endeavours that they couldn't pursue before eg. cartoons or movies for less famous characters. Any failures that they might incur would be absorbed by the pockets of the big Mouse. Also, this opens up the doors to much more geek-centric films, like Pixar created superhero movies (like The Incredibles, but with more known heroes!).

But at what cost? Will the mature content and subject matter be toned down in the comic book stories? Will we see no more rated-R superhero movies a la the Blade franchise? [note: on a messageboard, someone assured me that if they did produce R-rated features, that it would probably be released through Miramax Films, also under the Disney umbrella].

As you can see, I'm on the fence about it. I guess we'll have to wait and see how everything pans out. Just as long as they stay away from stupid crossovers in the comic books, then I'll be fine. Least of what we need is Goofy joining the Avengers at this point.

Slapinions said…
I'm a big Disney fan, being a father of four, but more of a DC guy than Marvel. I think this SUCKS. For one thing the superhero film genre is so saturated I gag at the sight of another one. For another, I think Disney will have a hard time balancing their family image with Marvel products. What's next The Wolverine Tea Cup ride at Disneyland?
September 1, 2009 at 7:08 PM

The Lam said…
All good points.

Slap, that is exactly what I'm afraid of. Will they water down the Marvel product until it does become more family friendly material for their banner name, in a way, almost censoring the material. I really hope not.
September 1, 2009 at 10:20 PM

Kevin said…
I dunno, Disney probably pays some big money for consultants, so I doubt they'd risk alienating fans of the original stuff.

I definitely don't speak from experience here, but from a strictly business point of view, it wouldn't really make sense.

What Disney does do though, is give the brand some more financial power. The possibilities? I don't know- but I'm sure you could dream something up.
September 1, 2009 at 10:51 PM