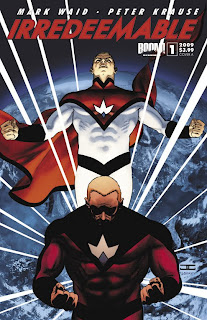 (Note: be warned that this review is on the spoiler heavy side, so read at your own discretion if you don't want the story spoiled.)

Since I was a teenager, I always had this dream that I would become a quirky movie director and I'd make a bunch of crappy little horror movies to start with, but that my first big movie would be this anti-superhero movie. I dreamed up of an Apocalypse Now-like movie using existing Marvel superheroes where Captain America would go mad, slaughtering the innocent and go into hiding somewhere 'up the river'. There would be a detective like character (possibly superhero) that would be after him, interviewing his former teammates to find out what made the all-American hero go mad.

Imagine my surprise when I started reading Irredeemable. Although not exactly the story in my dreams, it's pretty close.

I started reading the series this past weekend upon the glowing review that those geeks over at iFanboy put up a few weeks ago. As far as I know, the series is only going to be 12 issues long, so we're already passed the halfway point. That said, I'm hooked! I stayed up until 2:30 on Sunday night to get caught up on issue #7.

Much like Watchmen, Mark Waid's Irredeemable is a deconstruction of the superhero archetype. It tells the story of the world's most powerful superhero, Plutonian (somewhat similar to Superman), who goes mad one day and wipes out millions of people worldwide. He murders a few of his former teammates from the superhero team, Paradigm, who are hot on his trail to find out what exactly made him snap. 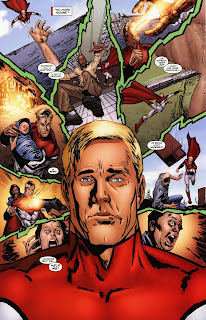 Plutonian, trying to ignore the cries of the world.
The story switches between flashbacks and the present to show his descent into madness. There's no one particular situation that sets him afire, but it's all the little things (like the lack of respect or thankfulness) that add up until he explodes. He's the world's most powerful being but he no longer wants the responsibility of being a hero. What's even more troubling is that with his super hearing power, he can hear the world's screams for help even though he's trying to ignore them.

The story is littered with chilling scenes as we see Plutonian delve deeper and deeper into villainy. There's a bizarre scene at the beginning of one issue where we see a man dressed like Plutonian and a woman dressed up as Bette Noir (one of his teammates) nervously having sex. On the next page, the panel zooms out and we see the real Plutonian hovering above them ordering them to perform for his viewing pleasure. WEIRD!

We also see his remorselessness firsthand. There's a scene where he's about to wipe out Singapore and it's 4 million inhabitants. The heroes from Paradigm arrive in an effort to save the people, but Plutonian catches them and although they plead, he only allows them to save 10 people. 10 out of 4,000,000. But they have no choice, in dealing with this god-like being. Tough decisions. How do you choose 10?

Although the story is centered around Plutonian, we spend more time with the heroes of Paradigm as they recall stories with him, hoping to unlock clues that will solve the mystery. In fact, very few of the scenes are shown from the perspective of Plutonian unless they were flashbacks.

As a non-artist, it's difficult for me to comment on the art (I can't tell what's supposed to be good or bad), but I can say that I like Peter Krause style of drawing. And for me, a good story always trumps the art, so even if it were bad, it's almost a non-issue as long as the story is engaging.

I can't wait for the next issue. I'm definitely buying this series when it's out on trade. If you're a geek for superhero stories that show a lot of humanity, then I say pick this up. Until next time, later geeks!