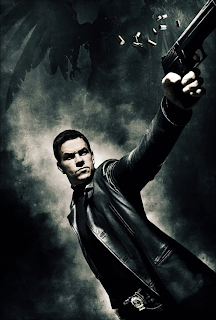 What a failure this was. An EPIC FAILURE~! And I'll tell you why. This movie had everything going for it which was why it made the failure seem so huge. It had star power. It had a very competent director. The visual style was there. It had a simple storyline... a storyline that was basically fuck-proof because it's so basic. The effects (when there were any) were also pretty great. So where did they go wrong?

Max Payne is based on the video game of the same name following the titular character as he searches for the killers of his family. The storyline in the movie was basically the same, although there were some obvious deviations (crooked corporations instead of gangs and mobs).

Although Marky-Mark's acting was the palest of comparisons to his performance in The Departed, I can forgive it only because in the game Max Payne, those performances were wooden. Ludacris was just a little more than a set decoration in various scenes. The first time he popped up on screen, the theater erupted in laughter (the same thing happened when my friend saw it last week). He's a fine actor, I think it wouldn't of hurt to give him a bit more screen time. Mila Kunis does her best to play a tough chick, but I just can't buy it. She's the scrawny little girl from that 70's Show, and she's too sweet to play the rugged girl. However, she was fine too.

Hats off to the set decorators, editors, and director of photography. They did quite a superb job of disguising Toronto as New York City. I kept looking for clear Canadian landmarks, but couldn't find any. I think I caught a brief glimpse of the Four Seasons Centre though. Oh yeah, and the obvious Bay Station at the beginning.

So in the end, I guess that's the grand tragedy of it all; the potential was all there, it was just squandered. This could have been great. They left the ending open for a sequel, but I have major doubts to whether they'd act on it. Until next time, later geeks.

The Cheap-Arse Film Critic said…
That's a damn shame. I still want to see this though, for two reasons- Veriety, of all magazines, actually gave it a half-decent review, and I quite like Mark Wahlberg as an actor.
October 23, 2008 at 5:10 AM

Mike said…
I seems they will never get a video game movie right. High hopes for this one but sounds like a dud.

Unknown said…
I probably wasn't going to see this one due to some of the horrible video game adaptations I've seen in the past, but I think this review cinched it for me.

The Lam said…
@Dave:
Hahaha, an NES game would be more well spent!

@rudjard:
There hasn't been any video game movie that I've really liked yet, I'm still waiting for it. But at least you enjoyed RE.