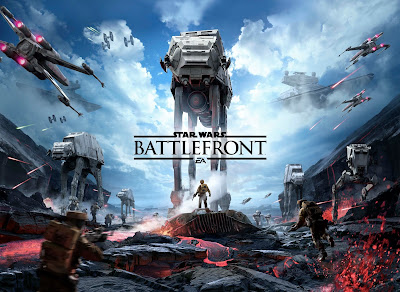 Perhaps timed with the release of Star Wars: The Force Awakens and to ride on its publicity train, Star Wars Battlefront was released in November of last year.

Star Wars Battlefront is a predominantly multiplayer shooter.  It features a wide variety of modes focusing on player versus player content.  It includes a “Fighter Squadron” mode where Tie Fighters pit against X-Wings, “Heroes VS Villains” where some of Star Wars’ iconic characters do battle, and “Walker Assault”, probably my favourite mode where the Imperial soldiers protect the AT-ATs from being taken down by the Rebel scum.  It also includes the standard modes that one would expect from a multiplayer shooter like a team deathmatch (which they call Blast), capture the flag (which they call Cargo) or capture the point (either Droid Run or Drop Zone).  There are also offline “Mission” modes where you and one friend can do more simple missions, like ward off a squadron of Stormtroopers or… ward off a squadron of Stormtroopers (i.e. there’s not too much to do in Missions).  It’s clear that the focus is on multiplayer.

In this game, since you’re firing off lasers instead of bullets, you’re given unlimited ammo.  The only kickback is that your gun overheats if you fire too often requiring a momentary and defenseless lapse before it cools down.  So timing between shots is key, or else you’re left with a firearm that’s too hot to handle.  You’re also given a “Hand”, with three cards that you’re allowed to equip.  Two of the cards you can pick are item related, for example, a homing missle, or a sniper rifle or Chewie’s bowcaster (!), to name a few.  These items can be used unlimited times in battle, with each having its own cool down.  The third card you get is a special item that has a finite number of uses.  When activated, they can do a number of things, like takeaway overheating on your weapon or fire charged shots with your gun.  Each time you use this item, it eats up a charge.  You can gain more charges by finding a thunderbolt like item on the battlefield (not too hard to find) or by purchasing them with your in-game credits.

After each battle, you’re rewarded with experience points of which 10% of it is awarded in in-game credits, which you can use to buy a number of different upgrades. 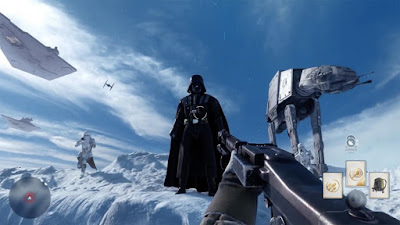 The game has been criticized for the lack of depth.    Although there is a leveling and progression system in the game, there’s not much to be done with it.  The higher level you get, the more opportunity you have to unlock items, appearances/skins and emotes.  You can get all the weapons once you hit level 25, and all the useable items once you hit level 32.  Everything after 32 are only cosmetic upgrades making the leveling system a bit superfluous.  And on top of that, even with the weapon unlocks, with a dozen or so guns in total, very few of them feel different from one another.

In some modes, you’re also allowed to play as heroes (Luke Skywalker, Princess Leia, Han Solo) and villains (Darth Vader, the Emperor, Boba Fett) from the game.  Unlike your normal Rebel or Imperial footsoldiers, these characters have a life bar that doesn’t regenerate, so although they are quite powerful, they are also disposable.

Technically and artistically, the game captures the sights and sounds from the original movies very well.  When you’re running through snow with 19 other Stormtroopers on the ice planet Hoth, you can’t but feel like you’re back in Empire Strikes Back.  It’s made all the more exhilarating when you run across Luke Skywalker or Darth Vader, fighting by your side. 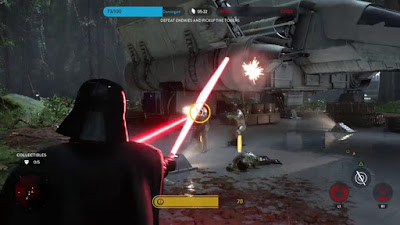 Sometimes you ARE Vader, and deal the face slashing.
Despite the criticisms, I’ve really enjoyed the game.  I’ve sunk about 45 hours so far into it and I’m still enjoying it.  It’s true, the depth isn’t there.  However, it feels to me that they traded in depth for a lower barrier of entry which is more welcoming to players who aren’t as great at shooters.  And the team at DICE who developed it, pointed that out too.  They wanted to make sure it was an experience that could be had amongst a broader range of gamers.  I just feel better hopping into these battles than in Call of Duty where you could be decimated as soon as you step in the field.

I think my biggest complaint though is the matchmaking process and the team balancing or lack thereof.  I suppose because the game wants to give you a chance at playing each side, between rounds, you’re whole team is switched between Rebels and Imperials.  There is no auto-team balance or any shakeups between rounds.  This can be frustrating as if you land on a bad team, you’ll likely lose and lose and lose and lose.  Conversely, if you find a great team, you’ll roll over the competition round after round.  I would prefer them to have an auto-team balance instead of just switching your whole team en masse to the other side.  I don’t mind playing as a Rebel or Imperial multiple times in a row, I’d prefer a fair game.

Aside from that, I’d still recommend the game.  It’s not a hard recommend as the multiplayer only focus stifles the experience and there’s the depth issue.  However, if you want to feel like you’re part of a Star Wars battle, then this is an easy one.  Until next time, later geeks!