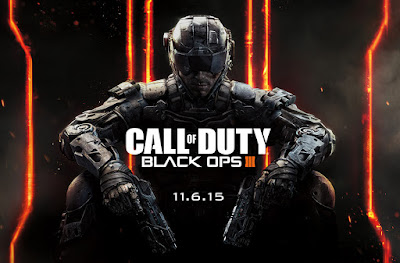 Call of Duty: Black Ops 3 is Activision’s latest entry into the bestselling Call of Duty franchise.  Developed by Treyarch Studios, the Black Ops subseries of Call of Duty games has been considered by many as the best of the COD games.  Whereas Black Ops 1 and 2 were direct sequels, BO3 seems only to be a spiritual sequel to its predecessors.  There is no direct or clear continuation of story from the previous entries.  Rather it takes the ideas of mind control and manipulation, and spins off its own story.

It’s a futuristic world, where humans are infused with technology (much like Robocop!) and fight alongside and against robots.  This time around, you assume the role of an unnamed soldier, who together with your partner Hendricks and a CIA agent named Rachel Kane, track down a former Black Ops commander named John Taylor as he and his former squad appears to have gone rogue destroying CIA sites around the world.  The story will take you to Singapore, Egypt and even wackier, you’ll have battles inside someone’s head, taking you to World War I and even in a cabin fending off zombies.  Of the Call of Duty games so far, and strictly from a campaign standpoint, this one was probably most wackiest (yes, even considering the space and underwater fights in Ghost)!

The game allows you the option to play the campaign offline by yourself, or online with three other human players in your squad.  The game balances this out by increasing the bullet sponging of the bad guys.  As I recall, they don’t do this with the human bad guys, but since half the game you’re fighting robots, I guess they justify it by giving them stronger armor. 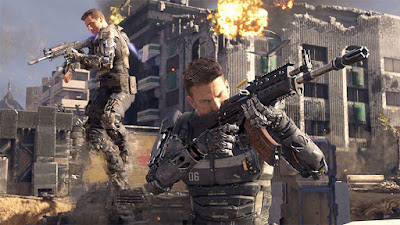 The campaign structure received an overhaul this time around.  Between each mission, you can completely customize your loadout, similar to what you would expect in previous COD multiplayer modes.  However, not everything is given to you from the outset.  Your mission performance awards you points, where the more you points you get, the more you level and the more unlocks are given to you.  From there, you can pick what weapons, perks and add-ons you want at your disposal.

Furthermore, you’re given the option to pick between different cybercore abilities which are additional skill sets you can use during the game.  The three are Control, Martial and Chaos.  Control, probably my favourite of the three, allows you to hack into the different robots or tech that you’ll encounter in game.  For example, you can disable a bad guy’s armor, or shut down the flight system of drones, or even hack robots such that they turn on each other.  Martial, which I used the least, relates more to maneuverability related abilities.  Finally, Chaos as one would guess, is related to more offensive type abilities such as shooting out a wave of fireflies to eat at enemies or exploding robot soldiers.

Of the modern COD games, this campaign felt the longest to me.  On average, I’d spend an hour per mission, including all the cut scenes.  And with 11 missions in total, it took around at least 10 hours to beat the first time around.  That’s double than what I’m used to for a COD game.  I can’t say that this is exactly a good thing.  Part of the reason why I enjoyed previous entries was that the story gave you a quick hit but never overstayed it’s welcome.  Perhaps it’s because of the shittier story, but the game just felt like it dragged on!

I really enjoyed last year’s Call of Duty: Advanced Warfare, but Black Ops 3 really felt like a step down from that.  I think part of the problem is that in AW they really changed the dynamic by giving you dashes and speed boosts as well as the aerial thrusts.  This time around, they’ve brought back the aerial thrusts, but the speed boosts are gone, so the dynamic of multiplayer matches really took a hit.

That said, I haven’t spent too much time on the multiplayer side, but from what I’ve played so far, it seems to be the Call of Duty as we knew it.  If you liked it before, you’ll like it this time, but if didn’t like it before, don’t look for anything to change your mind.

There’s more fun and interesting games out there, so unless you’re a diehard COD fan, I think you can pass on this one.  Until next time, later geeks!