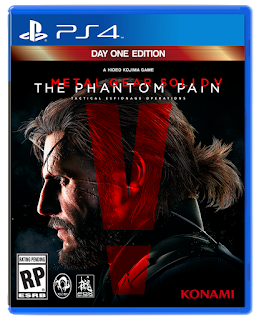 It’s been over a month!  There’s so much I wanted to write about but I feel like I didn’t have the time!  Hopefully I’ll have more free time now that we’re nearing the holidays and I’ll catch up on all the items I’ve had in mind.

But since I haven’t written anything on a game for a while,

Metal Gear Solid 5: The Phantom Pain is presumably the last entry in the series from video game mastermind, Hideo Kojima.  The Kojima, the game and the publishing company itself, Konami, have been mired in controversy this past year.  In fact, Kojima has officially parted ways with Konami as of yesterday, ending a decades long relationship.  (News sites claim that his new studio has an agreement to make a PS4 exclusive game as their first outing).

Phantom Pain continues (or fills in) some of the gaps in the Metal Gear Solid saga.  Granted, I haven’t played ALL the MGS games so I don’t have a complete grasp of the whole story.  Even then, the story is so convoluted and wacky that I don’t think those that have played all the games fully understand the story.  This Reddit post (here) does a pretty good job of giving you the bullet points in chronological order from each game.  It gives a better general understanding, but I’m sure if I prodded specific details, it’d be confusing.

Fortunately, story is not the point in Phantom Pain.  The game takes place in the 80s and for the most part, tells the story of the formation of Big Boss’s army across Afghanistan and Africa.  There are secondary stories dealing with rogue organizations, Skullfaces and children soldiers, but they really feel ancillary to the larger picture of the army formation and the seed planting for the future (or past) MGS games.  Unlike all the other MGS games, surprisingly, the game is light on story and gone are the hours and hours of cutscenes and exposition.  This time it’s more focused on gameplay.  Fortunately, the game excels at this!

The game is filled with 50 main missions that must be completed to advance the story.  Additionally, you’ll have side ops in both countries, which are 99% of the time optional (sometimes you’ll need to complete a certain side op to unlock a main mission, but rarely).  What’s interesting is how they encourage different styles of gameplay depending on if you’re completing a main mission or a side op.  In main missions, there’s a point system where you’re evaluated on how stealthy or sneaky you were, how precise you were in combat and quick you were.  Going gun blazing into a mission, although may be a successful, would provide you with an overall lower mission score.  The mission score in turn rewards you in cash for which you can use to do an assortment of things.  More on this later.  So while the main missions requires you to exhibit some tact in your performance, the side ops basically throws all that out the door and says, do whatever the fuck you want!  It’s here that you’re left without constraints and can deploy a tank in the middle of the battlefield or go commando style in your missions.  Grenade launchers everywhere!  Do what you want, just get the mission done! 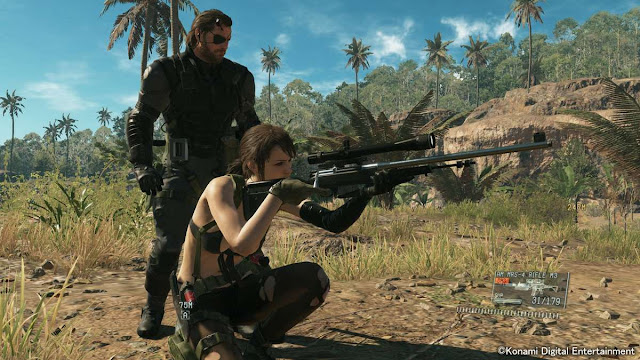 Big Boss and Quiet.
Before deploying into any mission, you’re allowed to customize your loadout, which includes your primary and secondary weapons and also your partner.  Of the partners selection, you’re provided with D-Horse (who provides for quicker transportation around the map), D-Dog (who sniffs out enemies and loot!), the scantily clad Quiet (probably the most useful partner, and the only human partner at that), and a walker mech (admittedly, in my 100 hours of gameplay, I didn’t use the mech once).  Quiet, who I think most players probably used the most due to her usefulness, is a sniper who can mark enemies.  At first, she comes with a standard issue sniper rifle, which makes a lot of noise and attracts a lot of attention.  But later on you can upgrade her gear so that her rifle is equipped with a silencer, for more stealthy approaches.

Probably the most satisfying aspect about the gameplay as least for me was the extracting system in the game, dubbed as “fultoning”.  Basically, the fultons are balloons that you use to launch/extract almost anything from the mission field.  You’ll be using this system to extract and recruit enemy soldiers, vehicles, weapons, crates, animals (including BEARS!), and so forth.  The fultons are attached to the subject, and after a few seconds of dangling in the air (and if no enemies shoot the balloon down), they’ll be shot off into the skies and returned to your home base.

Aside from the missions, you’ll also be spending a lot of time in the menus!  YAY!  While a lot of it is necessary, there are a lot of equally unnecessary parts.  Of the necessaries, you’ll be building and upgrading your base, researching and upgrading your weapons from these menus and managing your resources.  Apart from going on missions yourself, there are a set of missions that are intended only for your army to go on, so you need to choose the best suited soldiers to deploy these affairs.  Those are the main necessary ones.  Of the unnecessaries, they are mostly related to the online functions.  There’s options to combat with other players and infiltrate other bases to gain resources and troops.  I only dabbled a little bit into these online options. 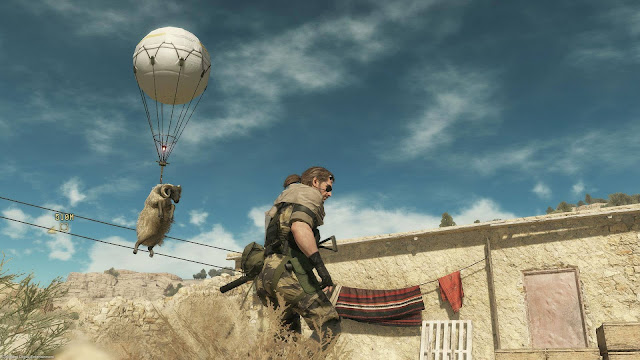 I guess what makes the game so fun is the freedom you’re given to complete any of the missions.  Basically, if you don’t care about score, you can do whatever you want!  The system only encourages you to play a certain way, it never really penalizes you (aside from a lower score, which doesn’t really matter) if you want to go out a certain way.  But from my experience, it’s the small touches that make you smile.  For example, in your home base, you’ll see soldiers patrolling or on guard duty.  Sometimes they’ll be talking to each other and you can sneak up on them to listen in on their conversations.  Oftentimes they’ll be praising you for doing inane things like how you’re such a great person for saving animals.  Or how cute D-Dog is.  It’s just funny in the context of these macho soldiers.  The part that got me every time though is whenever you fulton a friendly character.  For some reason, whenever you fulton an enemy, they’ll scream in fright, but if you fulton a friendly, they’ll scream in delight and joy at the ride they’re getting.  The screams of ‘yahoo!’ are joyous!  And it’s just a little detail.

Needless to say, there is a lot of game in this little package.  I completed the story and most of the side ops.  At the end of it all, I reached about 100 hours of gameplay.  That is more hours than I can remember having spent on any other game in recent past (I think Final Fantasy X was the last game that I spent an exorbitant amount of time on… but I was 20 at the time).  You’ll definitely get the bang out of your buck!  And too much in fact!  There were times when I wanted to give up on it because it was just too much!  But if you stick it through, I think you’ll be rewarded with a memorable game experience.

If you’ve got the time, it’s worth it!  It’s a game that you can just pick up and play, if you’re not worried about the lack of story.  This is an easy recommend and possibly, this year’s GOTY!  Until next time, later geeks!