Knock, Knock is about an architect named Evan Webber (Reeves); a happily married man with two kids.  On one particular weekend, the wife and kids go away to the beach house while Evan stays behind to catch up on work.  The first night is a stormy evening with what appears to be a torrential downpour.  That night, two unexpected young females show up at Evan’s door.  Drenched from head to toe, the buxom young lasses claim that they got lost looking for a house party in the neighbourhood.  Evan let’s them in to dry off and use his tablet to find the right address.  Due to the stormy night, it wouldn’t be 45 minutes until a cab arrives to pick them up.  And that provides 45 minutes for them to seduce him.  What seemed like fun and games the previous night turns into disaster and terror, as the two seemingly innocent seducers manipulate, confine and torture Evan.

Coming out of Knock, Knock, I had a difficult time categorizing what kind of film this was.  There was a little bit of horror, mystery, thriller and comedy in the mix, however, none of these outweigh the others.  Which perhaps is the first problem; the movie doesn’t know what it wants to be.  You come away from the film feeling unsatisfied. 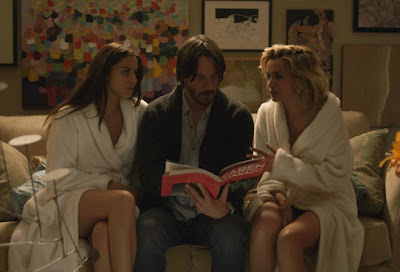 "And theeennnn I took the red pill!"

It also didn’t help that the story was weak.  The story is filled with plot holes which takes away the levity of the film.  During the movie, I was thinking of all the different ways that Evan could get away or reasons he could provide to prove what happened at the end.   It all made it seem flimsy.  The premise of the movie itself seems scintillating, and perhaps that’s where the intrigue stops.  Another problem with the story is the characterization.  Evan Webber is essentially a good man, who is seduced and deceived. But apart from this incident, he's a wholesome husband and father. So it makes the whole thing seem nonsensical... like why did they even pick on him?  They provide some loose motive but it doesn't hold together.  In Evan's heat filled tirade, he even compares it to getting "free pizza"!  How could he turn that down?  It's different than say 2005's Hard Candy, which is tense and effective because as the movie progresses you find out that the innocent man is not so innocent. It brings reasoning to the punishment.

The acting, particularly by the two female leads is terrible.  Perhaps because they are two foreign actresses working with an American script.  They are over the top and not in a convincing or fun way.  The quality of their performances isn’t too far off from a stage production that you would expect to see at a high school play.  They are supposed to be threatening and evoke terror, but most of the time they just seem annoying.

The one redeeming feature is Keanu Reeves.  Perhaps he knew and understood how stupid the story is, but Reeves pulls off a performance of a lifetime.  I don’t recall any other of his performances where he shows such range.  It’s just a shame that it’s in this movie; likely a movie that not too many will ever see.  Thank the Lord.

So there you have it.  Knock, Knock?  Who’s there?  Nobody.  Nobody who?  Nobody go see this movie.  Later geeks.