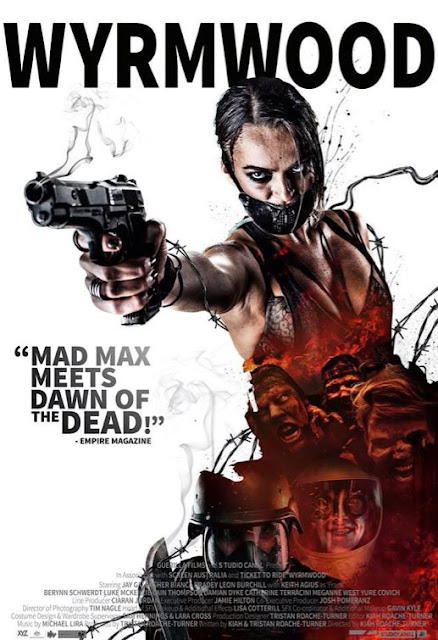 I know a lot of you out there feel the same way, but it's worth mentioning anyways, but the older we get, the less free time it feels we have.  And unfortunately, that's one of the reasons why my posts have been so sporadic, if not altogether non-existent.  I haven't had as much time to enjoy as much geekery as I've wanted to, and even less time to sit and write about them.  I really enjoy writing about geek related stuffs and actually a friend was asking me about my blog writing a month or so ago.  It encouraged me to dabble at it again.  As a friend once said to me, it’s that reflection and that dissection that graduates the medium to an art form.  And so it's a new initiative of mine to try and write at least one post a week about something... anything!

If I had to choose one, I think the geekery that took the biggest hit has been movies.  I feel like with gaming, books, comics and TV shows, it's easy to fragment the medium into save points, chapters and episodes without hindering the overall experience.  But with movies, it's intended to be consumed in one sitting experience, so to fragment a movie is to take away some of its joy and its intended method of consumption.  This is all to say that I haven't watched as many movies recently.  You can see from the links on the right hand side, which logs all the 'new' movies I've seen each year, the aggregate amount diminishes with each year.  Moreover, I find that when I’m watching a movie at home, I get distracted much easier.  I’ll be on the phone or laptop every 15 minutes to check up facts about the movie and cast and so forth.  I’ve learned that I’m much better at watching movies within the theater, where I can’t (or shouldn’t!) pull out my phone or laptop.

Unfortunately, these days I have to really pick and choose what movies are worth investing my time in.  Double unfortunately, most of the ones that don't make the cut are B-movies or DTVs, only because most of the time, let's be real, they suck.  And I guess my tolerance for ‘suck’ has decreased.

That all being said, it is with my distinct pleasure to write about Wyrmwood.

Wyrmwood is a post-zombie-apocalypse movie in Australia.  The story, as simple as it could be, is about a man named Barry who’s trying to connect back with his sister during the zombie invasion.  The sister, Brooke, is kidnapped by a group of masked men and scientists, for mysterious and unknown purposes.   Like a lot of zombie flicks, it’s a movie that involves a treacherous journey and survival.  Lives are lost, limbs are severed, heads are blown along the way. 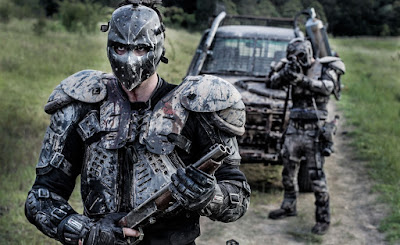 I first heard about Wyrmwood at the Toronto After Dark FIlm Festival in 2014.  Me and my friends saw a promo for it during another feature and it was scheduled to play that week, however, tickets were sold out.  It looked highly stylized, with characters armed in Mad Max type gear, and slow-mo zombie killing.  What more could you ask for!

If you don’t like zombie movies, this one won’t soon change your mind.  Overall, they try a few new things, but it’s not enough to be radically different from what you’d expect from a zombie movie.  However, what it does, it does solidly.  And for a low-budget feature, it is very good.

According to its Wikipedia entry, the budget for the movie was $160,000... which is quite astounding!  It doesn't look or feel like a $160,000 movie!  The cinematography is one of the best qualities about the film.  There is a lot of shaky cam style.  But it's quite gritty, in your face and visceral.  The way the movie is shot really makes you feel like you are right there in the thick of all the blood and guts.  There is a lot of slow-mo camera use as well!  You might akin this shooting style to something you'd expect from a Zack Snyder movie, that with a much larger budget.  The makeup and practical effects are great as well!  It's just amazing sometimes what a movie can do with so little money versus those Hollywood schlockbusters that can do so little with so much money!

If you like dumb-zombie flicks, you can go no wrong with this one!  And for a change, we get to see it in an Australian setting, so that’s a win!  Until next time, later geeks!

Anonymous said…
The scatter symbol usually cannot be matched using wilds, and some video games could require the scatter symbols to seem on consecutive reels so as to to} pay. On some multiway video games, scatter symbols still pay in unused areas. Sittman and 카지노 사이트 Pitt of Brooklyn, New York developed a playing machine in 1891 that was a precursor to the modern slot machine. It contained five drums holding a complete of fifty card faces and was primarily based on poker.
December 1, 2022 at 9:09 AM