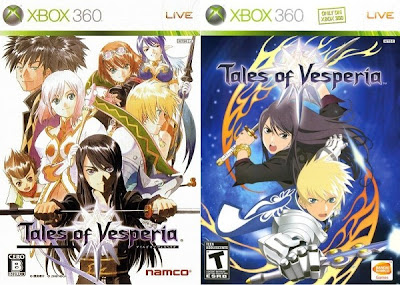 Amidst the shooters that have dominated the play space in the past while, I found reprieve with Tales of Vesperia, a Japanese RPG that was originally released in America in 2008.


Tales of Vesperia follows Yuri, a former-knight turned rebel who starts off the tale chasing down a thief who’s stolen a magical artifact (referred to in the world as blastia) from his city.  Yuri tracks down the thief alongside with his trusty pipe-smoking dog, Repede.  In the middle of this mini-saga, you are joined by a doe eyed princess and a valiant hearted young hunter.  Like all good adventures (and pretty much every Japanese adventure!), what starts off as a small adventure spirals off into an enormous affair.  Your party becomes entrenched in a rivalry between the Empire and the free people (called the guilds), amidst a cosmic ballet of magic.

The game is an epic adventure, to say the least, requiring around 40 hours to complete the journey.  But that is to be expected, especially in the Japanese role playing game genre.  Now, I’ve been wondering whether I really enjoyed the game or was it just because it was so different than everything else that I’ve been playing that’s heightened my joy.  It’s been a few weeks since I finished it and I think I’ve determined that it’s a good game, not great, but good.  It’s an interesting turn of events as when I started playing it, for the first dozen hours or so, I was in love with it.

Everything technically about the game is exceptional.  The anime style visuals are gorgeous.  The voice work is superb.  The script and dialogue are both whimsical and charming.  The battle system is addictively fun.  These are all great qualities, much needed to create a great role playing game.

The story is the glue that holds the whole thing together, and it’s here where I felt things fell short, especially towards the third act of the game.  You think you’ve killed the last boss but things continue to drag on afterwards.  It’s another case of Lord of the Rings: Return of the King.

Throughout the game, you are presented with optional dialogue scenarios that you can ignore or play out.  For the first two thirds of the game, I went through every scenario because I wanted to hear it all and I wanted to be enveloped by the story.  But by the end, my care waned as I started skipping them all.

I think the most annoying thing with the game was whenever a character in your party temporarily left your group.  Every time he or she would leave the group only to later rejoin, a pop-up screen would load to inform you of the change.  It got annoying.  Sometimes they would leave for only 2 minutes.  I don’t need to know, every time he or she (figuratively) needs to take a shit.  If you gotta go, GO!  You’re gonna come back anyways!

That being said, there are some directions with the story that I found quite surprising.  Not all the actions of your hero is commendable and it’s at these moments where I found myself saying, “wow, I didn’t expect that, or really agree with it”.  The game poses some intriguing questions on morality.

There is a more sentimental, emotional and human aspect with the story, much like most JRPGs.  And I think this is what separates Japanese gaming from its American counterpart.  When you think of all the biggest and most mainstream games on our side of the ocean, they’re all about that “ooh-rah!”, chest-thumping, adrenaline pumping sensation.  It’s a very outward sort of emotional experience.  Japanese gaming, especially within RPGs, seem more focused on the inward type of emotional experience.  It’s reflective and contemplative.

If you’ve ever played any of the “Tales of...” games, then you are probably already familiar with the game’s structure.  It is played out like a traditional Japanese RPG.  While everything related to the exploratory nature of the game follows the typical JRPG tropes, the battle system is what sets it apart from other JRPGs.  The game features a real-time action packed style, where your party of 4 engage in battles together.  You control the leader (which can be switched to any teammates) while the AI controls the rest of your team.  The AI behaves based on your pre-configured behavioural and reactionary settings.  You can have them stay away and heal everyone and run head first into the fight.  Because of the real-time style of battle, the fights move fast, with most fights lasting seconds, while a boss battle might only be 3 minutes.  You need to be quick and observant of your party members actions and conditions.

The game features a superb soundtrack, ranging from orchestral pieces to rockish tunes, all influencing the emotions of the setting.  The diversity of music is something to be expected and always appreciated in JRPGs.

If you’re looking for a departure from the bullet-crazed, vitriol-filled games crowding the store space, this MIGHT BE (but is not certainly) it.  Understandably, JRPGs are for a certain type of gamer, it’s not for everyone.  But if you’re looking to dive into the genre, you can do no wrong with Tales of Vesperia.  The only tricky thing might be finding a copy.  Until next time, later geeks!