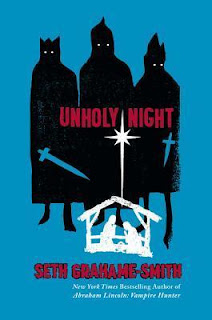 From the mind that brought you Abraham Lincoln: Vampire Hunter comes the new literary classic Unholy Night.  Much like AL:VH, Unholy Night takes a fictional spin on real world stories and characters.  Author Seth Grahame-Smith’s latest epic brings us on a journey alongside some of the Bible’s lesser known characters.

Unholy Night is the “untold story” of the Three Wise Men.  It enlightens us on some of the lesser known details relating to the nativity story.  We follow a renowned thief named Balthazar, dubbed “the Antioch Ghost”, one who has gained notoriety by robbing bureaucrats and politicians, all the while evading the Empire and making a mockery of them.  As such, he is the bane of King Herod’s existence.  After a mishap in one of his pursuits, he is caught and thrown into prison where he is joined by two other thieves.  The three men are sentenced to death, but Balthazar and his quick wits have other plans.  After pulling off the ol’ Loonie Tunes switcheroo, the three men escape under the guise of wisemen and flee to Bethlehem.  While seeking refuge in this village, it’s here that they come across a young and pregnant virgin girl named Mary, and her would-be husband, a carpenter named Joseph.  After hearing claims of the prophecy that the Christ has been born, King Herod orders the slaying of all male newborns.  Upon witnessing the atrocities firsthand, coupled with visionary dreams, Balthazar and his band charge themselves with protecting the young couple and their newborn Son.  But are these societal ingrates overmatched by the growing Roman Empire?

So essentially, the story is B-movie manifested in book form.  It has all the familiar tropes from a B-movie.  There’s the gratuitous amount of violence, the random, scandalous, yet descriptive details of debauchery, and zombies on top of all that!

On that note, early on when I was just getting into the book, I was sitting in a coffee shop when my pastor walked in and saw the cover of the book.  I explained to him what it was about and he said, “oh no there’s going to be zombies in it!”.  We both laughed.  After a few more days of reading, his claim came to life – there WERE zombies in it!

While I was reading, I felt at odds with the book.  I mean, on one hand, it was an entertaining read, but on the other hand, it was a bit blasphemous, in that it’s adding context to the Bible that doesn’t exist.  However, it doesn’t change the message of the Gospel, so I could hear the argument of “does it matter?”.  It sort of reminds me of the cinematic classic, Dracula 2000, a modern day horror flick, where at the end *SPOILER WARNING* Dracula is revealed to be Judas Iscariot.  But when do you draw the line of when it matters and when it doesn’t?

Seth Grahame-Smith has worked on other classics, such as the aforementioned Abraham Lincoln: Vampire Hunter and also Pride, Prejudice and Zombies.  I haven’t read these two, but heard and read that they weren’t the greatest.  The consensus seems to be that of the three books, Unholy Night is the most accessible read.

Because of the conflict I’ve described above, it’s hard for me to flat out recommend the book, as a God fearing young man.  I mean, I was entertained and I did choose to read it, so there’s that.  But just part of me inside is unsure.  It’s like the cute-ification of the Bible.  But is the Bible supposed to be cute?  Wrestle with that one.  Until then, later geeks!

Slapinions said…
I enjoyed the book. I too didn't think it was blasphemous, even if it added material, because the narrative clearly revealed the infant to be the Son of God. Between the infancy narratives of Luke and Matthew there's a heapin' helpin' of wiggle room anyhow.

Good to see you're still bloggging :)