JULIET, NAKED and why I enjoy reading. 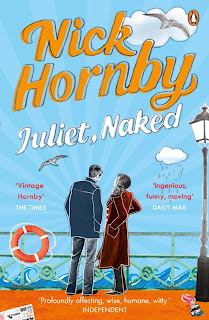 Every time I pick up one of his books, I’m reminded of why I enjoy reading.

It’s simple: I enjoy storytelling.  And although it’s the reason why I like movies and gaming, there’s something about reading a good story that connects with me more than the other two mediums ever could.  I’ve done some thinking and, for myself, I’ve figured out why.  With (most) movies or games, you’re told a story and you see the action.  Even if it’s dialogue, it’s still action.  Everything you see is after the fact.  You’re not really given a glimpse into the thought process, the weighing of options and possibilities and everything in between.  Even the expositions in movies give you only so much.

That’s where a good book has its advantage.  The thought process is allowed to be dissected.  You get to see what goes through a character’s head even before he or she makes the simplest decision.  You’re given history as to why he or she might feel a certain way.  The thought becomes richer and deeper.  And it’s this very reason that makes a book more relatable, more connectable.  It parallels reality as you have that build-up, that drama in your head, that playing out of scenarios before you make some significant decision in your life.  You just need to match the right story with the right person.

But I digress.  The book!

Juliet, Naked tells the story of Annie and Duncan, a couple who came to be not because they were initially in love, but because circumstantially, it was fitting.  They had similar interests, so why not.  The most prominent and central interest between them was in the form of Tucker Crowe – a famed rock musician in the 80’s somewhat akin to Leonard Cohen or Bob Dylan.

Tucker Crowe, who was a huge star in yesteryear, disappeared into obscurity at a club one night at the height of his fame.  Over the past two decades since his disappearance, a cult following was built up around him, fueled by the advent of the internet.

The drama begins when an unreleased live and unplugged album of Crowe's most famous album "Juliet" arrives at Duncan and Annie's doorsteps, aptly titled "Juliet, Naked".  Duncan, as soon as he listens to it, is enthralled; it's the best thing he's ever heard.  He quickly posts up a glowing review on the internet in response.  The internet geeks explode.  It's the newest material they've heard from Tucker Crowe in two decades and they bawl in delight.

Annie, however, has a different sentiment.

To her, it's not such a great album.  It's in fact, shitty.  Not usually one to give into the internet fanboyisms as Crowologists are wont to do, she drafts up a rather negative review.  As soon as it's up, she's hit with a wave of backlash from the geeks.

But despite all the noise and internet ruckus on forums, her review catches the eye of someone in particular.  Someone quite important to the fanboys.  Yes, Tucker Crowe himself.  They begin to build a secret relationship online, and it's here, that the drama escalates.

The story swings from Annie’s perspective to Tucker’s and a bit of Duncan’s to give you a full spectrum of views.

As I was suggesting early on, what made Juliet, Naked really work for me was the relatability of the characters.  Sometimes they think how I think and do things like I do.  As I was reading the book, there were multiple times when I was on the subway, banging the book against my head because my idiocy felt validated by the characters!

After reading Juliet, Naked, I realized that it helped me verify either one of three things.  That:

Just reading the way Hornby writes his characters, I’m convinced there’s no way that the thought processes aren’t from personal experience.  I can’t be the only one like that!  This is a testament to Hornby’s writing and why he continues to be my favourite author.  There’s no other author that I’ve read where each book I pick up consistently makes me say, “I do that too!”.

On the whole, I think I enjoyed Hornby’s Slam more, only because it focused on the adolescent way of thinking and often times, well... “I’m just a boy inside a voice”.

That’s not to take anything away from Juliet, Naked which is quite an enjoyable read.  It hits all the right emotional cues and is laced with Hornby’s style of humour throughout.  If you’re not a Hornby fan, I think this is the way to go.  Either this or High Fidelity.  Start there.  Til next time, later geeks!

Kly said…
There's nothing quite like the smile and satisfaction you get after you flipped the last page of a good book. Nowadays, I can relate it to the feeling of seeing my bread cooling on the table top after 8 hours of careful tender. I envy you book readers, especially Rebeka and yourself, just because I'm a painfully slow reader and my imagination runs a little too wild that I sometimes forget if I read it or dreamt it. However, I do get to feel a bit of that joy when someone shares it with me! So for that, thank you! :)
May 2, 2012 at 9:37 AM