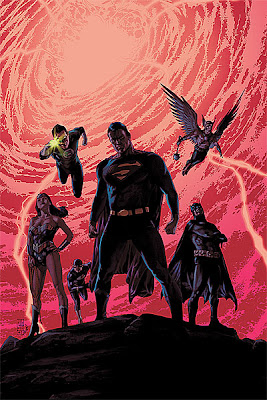 Grant Morrison seems to be hit or miss. And unfortunately, it’s been a while since I’ve read one of his hits. Final Crisis is the big DC crossover event that spanned from summer 2008 to early 2009. It’s a story of Gods and New Gods, aliens and supermen, humans and talking animals all rolled into one story. One mess of a story.

To summarize and regurgitate the story is a feat in of itself. Final Crisis is a convoluted tale that tries to take on too much. Essentially, it’s a story about Darkseid trying to once again destroy reality. But there are so many side stories, that this main plot gets lost. A lot of ideas are thrown into the pot, but none are allowed to properly cook. One of the consequences of telling a scattered story is that there is no central voice that really leads the story. The cohesiveness offered by a single voice was missing. Perhaps if it had that leading voice, a centralized narrative could have been established.

I think one thing that hurt the story is how fast the scenes move. There are very few scenes that exceed 2 pages in length, so what you end up with are a series of snapshots.

It felt very ineffective in trying to tell such a grandiose story. It’s as if you get glimpses but never a stare at the main story. In fact, near the end of the story something major happens to Batman (I’m not going to spoil it, but if you’ve seen the cover, it gives it away), but the gravitas of the situation is dampened due to the lack of focus. It was an event that should have felt momentous, but the lack of build around Batman during the course of the story really killed the dramatic effect.

You’re introduced to characters left and right, with large gaps in time before you return to them. And I like it’s Wikipedia description (here). On the right hand panel, where it lists general information about the series, under ‘Main Characters’, they list about a dozen characters before ending off with ‘rest of DC Universe’. Fitting!

A good story is filled with characters where you can understand where they’re coming from, both heroes and villains. It’s why I felt Identity Crisis was so effective. It told a story that made B-level characters seem like superstars. It gave them context. In Final Crisis, the lack of character development made for a lack of emotional investment into the story. They don’t care, and therefore, you don’t care.

I didn’t know much about Final Crisis, either its story or its reception. Just a quick search on Google shows an assortment of negative opinions. Which really sucks for the series, but did feel re-assuring for me. As I was reading the story the whole time, I kept thinking, is it just me? Is there something here that I’m not getting? There was something there that no one was getting.

So don’t give this a shot. Read it’s Wikipedia plot summary – it makes more sense and will save you time. Til next time, later geeks!