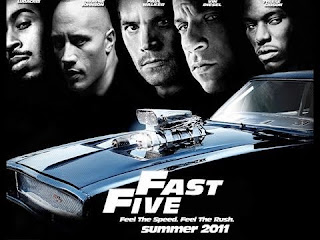 I probably should have written this a week ago, but man, it’s been a busy few weeks and I’m admittedly behind on many things. But hey, better late than never! And what a movie to talk about... Fast Five!

The movie starts off as we see Dom being hauled away to prison, for crimes from the previous movie. He’s taken away in cuffs and placed on a prison bus, as his friend and sister, O’Conner and Mia look on. A high speed chase ensues as O’Conner and Mia chase after the prison bus, attempting to free Dom. They speed in front of the bus and grind to a stop. The prison bus hits the little sports car, sending the bus flying and flipping through the air. Yet somehow, the sports car is umoved and undamaged! Cue opening titles. The opening scene pretty much tells you where the rest is going.

The movie then fast forwards to Rio, where the rest of the movie takes place. To avoid arrest in the US, the band is in Brazil conducting small heists to get by. Unfortunately, they steal a car owned by the most notorious crime lord in the city – a car that is of some special value i.e. bad news for our heroes. Now, not only are they the targets of US Federal agents led by The Rock, but now a gang of hot blooded Brazilians are after them. But they are not alone. In an Avengers-Assemble type sequence, our heroes recruit an array of characters from previous Fast and Furious movies. And it’s together that they pull off the biggest heist that they’ve ever done.

This movie is a wild fun ride! I’ve said it before, I love team based action movies. It’s why I enjoyed The Losers so much last year, and to a similar degree, The A-Team. The scene where the team finally comes together is classic. The only shitty thing is that it takes so long before this all happens. Going into the movie, I thought that they were going to assemble earlier on. Not so unfortunately.

The tone and action in the movie borders on the level of normally and comically ridiculous, but since it’s just a notch below, it’s still somehow in the realm of seriousness. But really, it’s not too far off from being The Other Guys. So although there are serious moments, you never take it TOO seriously. And most of the action defies the laws of physics, so belief must be suspended to some degree!

The cast does what it’s supposed to do in a movie like this – flex muscles, fire guns, drive fast cars and look good. You’re not watching a Fast and Furious movie for the acting chops. So in that regard, everything is met. The standout though, is the introduction of The Rock’s character which really made the movie for me. He is a constant source of one liners and bravado throughout the film. He is a key contributor of the fun in this movie. And the dream fight sequence between him and Vin Diesel? Yah, it’s here. And I swear, his biceps were growing half an inch bigger with each scene.

Using Rio as the primary location was a smart idea. The favelas continue to look great on screen. Despite the grittiness and ruggedness, it is a beautiful city bringing in a character in of itself. Seeing the city, I was reminded of Elite Squad, which if you haven’t seen, you must.

This is a feather in the cap for director Justin Lin, who hasn’t exactly had the best track record in doing movies, but hopefully this will be a step in the right direction. Based on the current success of Fast Five, he is being tapped as the director in the next instalment of the Terminator series.

Thinking the whole thing through, I think why I really enjoyed the movie was for the little lessons that it teaches you. I know what you’re thinking, “Fast Five taught you something?”. Well yes, indeed it did. It taught me the moral that the asian guy always gets the hot girl. I can go to sleep better knowing that.

Til next time, later geeks!