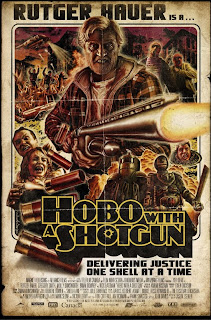 I love movies where the title describes what you’re going to get. Like Snakes on a Plane. Or Hot Tub Time Machine. There’s no ambiguity. Here you have a hobo. You give him a shotgun. Hobo With A Shotgun! Of course!!! The math couldn’t get any simpler.

Hobo With A Shotgun follows an unnamed hero/hobo as he lands in the town of Scumtown (or was it Fucktown?) after hopping from a train. Upon arrival, he quickly learns that the narcissistic Drake, along with his sons Slick and Ivan, run the town after witnessing a literal blood bath in the middle of the streets. The town is infested with drug, violence and heinous crime in general not unlike that of the Detroit depicted in Robocop 1 to 3. The Hobo sees it all and watches with a sick sort of disbelief. What the fuck is wrong with this town? After saving a prostitute named Abby from Slick, Hobo experiences his first run-in with the corruption in the town. Abby befriends the Hobo, and it’s not long before he shares with her his dream of owning a lawnmower and cutting lawns. It’s the dream that keeps him attached to reality. After leaving Abby’s, he cuts a deal with some rapscallions on the street to make a few bucks. With cash on hand, he heads to the pawn shop to purchase the lawnmower of his dreams. But all does not go according to plan. While at the store, he finds himself in the middle of a robbery. It’s here that he makes a life altering choice: should he purchase the lawnmower or the shotgun? Can you guess which he went with? From here on out, it’s a blood and guts affair to the nines, as he rights all the wrongs in the city. The Hobo becomes a folk hero to the citizens of Fucktown.

It’s funny. Coming out of Hobo, I felt positive about the movie but I didn’t come out loving it as I thought I would have – I just liked it, that’s all. However, it’s been a few days and the movie is starting to sink in. At the time, I think I was at a 6.5, now I feel more like a 7.

I’ve thought about it more today, I realized that the movie is allegorical to the current crisis in the Middle-East and North Africa. From the get-go, we’re introduced to the tyrannical leader who rules the citizens with an iron fist. Eventually, the people revolt and the revolution starts with the voice of a few which leads to a change for the many. And in Hobo With A Shotgun, it’s done one shell at a time.

Rutger Hauer as the titular Hobo, really makes the movie. His performance is a cut above the rest. He really owns it as the Hobo. Unfortunately, it makes everyone else look like amateurs... although, I think the majority of them were actually amateurs, so it’s no real knock against them. I don’t know if the movie would be as enjoyable without Hauer.

I really like the feel and the setting of the movie. It is akin of something from the 80s. All the tech is lo-fi, complete with boxy TVs, VHS tapes, arcade machines, etc. No cell phones or flatscreens in this production!

For gorehounds, fear not, the movie is nice and gory. Blood and guts litter the streets of Fucktown. I find these over-the-top type movies hilarious as in it seems like everyone is made of either glass or water balloons – they break and pop with the slightest hit. Speaking of over-the-top style shit, there is a lot of unexplainable stuff in the movie. There’s a lot of random things thrown in and it’s never questioned, it’s just a part of their world.

The soundtrack is also quite killer, pardon the pun. It is as cheese-tastic and corny as something straight out of the 70’s or 80’s.

But it’s not all love. I did have a few gripes with the movie. Firstly is the visual style. While most of it is gritty and good, there are sequences where it’s too much for the eyes. I’m talking mostly of those night scenes or dark scenes that are almost like watching cosmo-bowling or that scene from Batman & Robin where Robin and Batgirl are fighting off these neon hoodlums in a backalley. Hmm. And how dare I bring up Batman & Robin! The audacity!

The movie also wasn’t as laugh-out-loud as I hoped it would be. It’s certainly funny, but funny ‘hehe’ instead of funny ‘HAHA’. Hobo could have used more one-liners, heck, he could of talked more, because anytime his mouth opened, it was gold.

The film was Canadian produced and shot in quaint Nova Scotia. In addition with Incendies which I saw last month, I feel even more proud to be a Canadian. Though two diametrically opposite films, I enjoyed both.

This is the second movie to become a full length feature based on fake trailers attached to the Grindhouse double feature (Planet Terror and Deathproof), with the first being Machete. Although the movie is not quite as polished as Machete, it’s the low budgetedness of the movie that gives it its charm. It’s playing in Canadian theaters now, and I believe is getting a US release in May. If you’re a fan of Grindhouse-like movies, then this is a no brainer! Later geeks!

“Hold on while I wipe this guy’s asshole off my face.”
-Hobo; Hobo With a Shotgun