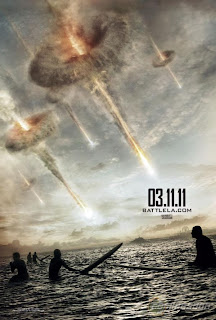 World Invasion: Battle L.A. Oh no. This was not a good movie.

There isn’t very much to the story. The movie takes place in August 2011, when one day aliens decide to invade our world. As it goes, the aliens have pretty much taken all over all of the major cities on the west coast… all save for Los Angeles. The movie follows Staff Sergeant Nantz (Aaron Eckhart) and his platoon of grunts as they look for a way to save the city and any civilians that they come across.

Battle L.A. is a lazy man’s Independence Day, without the fun or the tongue in cheek smarminess of Will Smith (awww hay-llll naw!). The story moves A to B without any feeling or emotion. What also hurts is the lack of a climax that is almost pivotal in big action blockbuster type movies. It lacks the sense of direness that one would associate with a world invasion. So the story doesn’t give you anything worth buying into and what’s worse is that they don’t give you any characters worth investing into either. Everyone is one dimensional. They’re quickly introduced at the beginning with a short blurb each, and we’re supposed to care? So with no good story and no good characters, what’s the point in watching the movie then? Loud noises and big explosions, if that is your thrill.

And I guess that is the one positive thing. I liked the way the action was filmed. I know a lot of people don’t like the shaky-cam style of filming, but I really like the grittiness that it adds to a movie. The action in this movie is frantic and the shaky-cam works well with it, making you feel like you’re right there in the battle with the platoon.

The movie pretty much hits all the Michael Bay-ian dramatic cues, complete with pep talk speeches meshed with a sentimental score, but clearly without the $200 million Michael Bay-ian budget. I was talking to my friend at work about this movie, shortly before it was released. It looked like a higher budget version of Skyline which was released (unfortunately) last year. But nothing, and I mean, NOTHING, should be compared to Skyline. What a wretched piece of shit!

And I will end as I began. World Invasion: Battle L.A. Oh no. This was not a good movie. Later geeks.