ADJUSTMENT BUREAU... I wish they could re-adjust my time 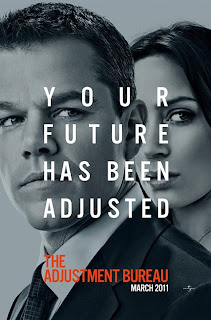 Well, at least I didn't go in with high expectations.

I didn't know too much about the movie going in; it was a story by Philip K. Dick and it seemed Inception-like. And in some ways, it was, but not in a good way. You see, I had the same problem with The Adjustment Bureau as I did with Inception. Both movies introduced these really cool, geeky and intriguing ideas but they were all used to pull off such a small scope of story. In Inception, it was a heist movie, in Bureau, it was a love story.

The story follows a young and hopeful US politician named David Norris who is running for a seat in the Senate. Despite his popularity, he fails to win the election after a would-be scandal jeopardizes his campaign. He bumps into a young woman hiding in the men’s bathroom stalls, who not only encourages him but charms him, inspiring him to go rogue in his concession speech. The speech takes off with the crowd, giving him an upward momentum in the next election. But was he supposed to bump into the woman? The next day as he heads to work, lo and behold, he bumps into the woman again, this time on the bus. Is it fated? Cue in the Bureau. Norris happens upon them by chance. The Bureau is represented by a group of well dressed men in business suits and ominous looking characters in SWAT outfits. The Bureau is not of our world. The Bureau controls or "adjusts" our actions behind the scenes. When things don't go according to the "Chairman's" plans, your life will be re-adjusted to get you back on track. The rest of the movie follows Norris around as he struggles with the intentions of the Bureau while searching for his love... this woman that he keeps bumping into.

At the end of the movie, me and my brother looked at each other and said, “is that it?”. The auditorium collectively groaned. I think we all felt a victim of the ol’ bait-and-switch. Beforehand, I had only seen the trailer once or twice, but I was under the impression that it was going to be this sci-fi-ish action-y thriller. I was wrong. We all were.

Thank goodness for Matt Damon. While the movie was no good for me, I still enjoy his acting. Doubly delightful is Emily Blunt, who I don't think I've ever seen in a movie before. I know her more as John Krasinski's wife than for her acting creds. She's pretty babetastic, it's no wonder Matt Damon's character searches years for her. Rounding out the named stars is General Zod himself, Terence Stamp. He pretty much plays the role that Frank Langella did in the Unknown last month.

While as a whole I didn't enjoy the movie, I did find redeeming things about the movie. The thing that made me go, “wha~!?”, was the subject matter of God (or the Chairman as they call it) and the idea of your life’s plans. Are you in control of them or are they completely someone else's? Hmmm. The whole idea is explored throughout the movie. The idea of life's plans and freewill are bounced around back and forth. It's interesting. It’s not a Christian standpoint at all, but more from a generic theological perspective. So if that subject matter piques your interest, Bureau might not hurt.

Anyhow, I didn't like it a whole lot, I'd say it's worth a rent or an On-Demand order at best. Go in with expectations low... like real low... don't expect action... expect kissing and romance and gooey stuff, and then I suppose you'll enjoy it. Til next time, later geeks!