Upside Down To Be Right Side Up 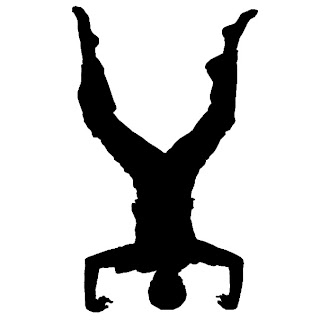 For the past few weeks, I've been thinking a lot about the idea of the Bible as the upside-down gospel, as described by one of my pastors last year. It revolves around the idea of irony, how many stories told within the Bible are based on backwards thinking - turning the whole thing upside down, if you will.

When cursed, you bless.
To be last, is to be first.
To be poor, is to be rich.
To be level 4 gnome healer, is to be level 85 dungeon raid leader.

Well, I'm sure that last one will appear in the new edition of the Bible someday. But you get my point, we are to be opposite from the way the world would want us to be. A life lived in irony, since we're not living for the world.

I was talking to my friend Drew last week. He shared with me a story that he's shared a few times before because of its significance in his life. Drew has this great passion to be within the acting industry; an industry that he's been pursuing for the past few years. Despite attending classes upon classes and auditions upon auditions, he could not sign onto anything solid. The stress and pressure was building; was it worth chasing after this dream? After some hard thinking and praying, he finally conceded that it was about God's desires for him, and not his own for himself - where God should want him to be, there he'd go.

Life then took an unexpected but welcomed turn. Later that week, he signed onto a role for this Canadian-made war movie. Not too far long after that, he signed a deal to become a TV host on a children's block of programming every afternoon. God's grace is amazing.

But the point of the story is this, that the opportunities that came only arose after realizing that God was the only true thing worth chasing for. The upside-down gospel. It is an immeasurable act of faith; to sacrifice a personal desire in order to show your commitment to God.

And it's something easier said than done. You can tell yourself easily, that you're going to give up your own plans for God. But to fully realize and convince 100% of yourself, including that small voice in the back of your head (that would tell you otherwise), is something completely different. It requires a total commitment and understanding of being a servant and disciple of God.

And perhaps after that point, God will give you that thing that you desired in the first place. But will you accept it and embrace it if he doesn't? Who's plans do you desire to live out?

It is similar to the story of the rich young ruler. When asked Jesus what he must do to receive eternal life, was told to sell all his possessions and "follow me".

This past Sunday, my pastor preached this amazing message on hope and hopelessness, that we ought to stop living miserably, open up the eyes of our hearts to see all the goodness that surrounds us. We are his inheritance. With this in mind, whether God grants you your dreams or not, if you have this very type of hope within you, do those plans or dreams even matter? It is a matter of faith and trust. Trust that He's doing good for you. Trust that He's for you, and not against you.