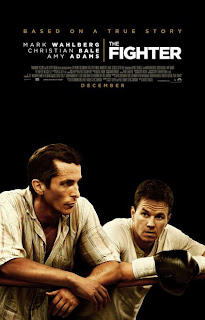 There's something about sports/sports-related movies that always gets to me. And it's interesting because I'm not a big sports fan (only as far as some MMA and unless you count prowrestling), yet I can really get into those types of movies. Movies add a narrative that's missing from its real life counterpart, and it's that narrative that hooks me. Football movies are a great example. I don't watch or understand football all that much, yet there's not one football movie that I haven't enjoyed, and I've seen many. But I wouldn't exactly put The Fighter in the same category as football movies, as the sport takes a real back seat to the drama that's up front. Sort of like The Blindside and football or The Wrestler and wrestling (I know, it's not a sport!).

The Fighter is based on a true story in the early 90's about a local boxer named Micky Ward (Mark Wahlberg) in Massachusetts who climbs the ladder in the boxing world, both hindered and helped by his older brother Dicky (Christian Bale), a former boxer and a crack addict. Micky and Dick are part of a close-knit family including seven sisters, who combined with their parents, are part of every decision in their lives, despite all being in their 30's and older. Micky tries hard to succeed as a boxer but fails miserably. Everyone outside of his family tells him that he has all the potential but that Dicky is the one thing that's anchoring him down. The story continues as Dicky continues to head down a slippery slope filled with drugs and crime and as Micky learns to let go.

The Fighter is a pretty awesome movie and doesn't hold back any punches (pun!). But much like True Grit, The Fighter seems more about the performances rather than the story. Christian Bale completely gets lost in his role as Dicky and at times, it's impossible to conceive that this is the same man who plays Bruce Wayne. He completely transforms himself into this fragile but frenetic crack addict. There's already Oscar talks in regards to his performance and it is well warranted. The other performance I loved was Melissa Leo, who plays the overbearing mother in the family. She plays the typical 90's Boston kind of mom, with a big mouth, big hair and big attitude. You want to hate her but love her at the same time.

What I love about movies based on true stories are how some movies choose to show clips or pictures of the real life characters at the end. We're shown clips of the real life Micky and Dicky at the end, and seeing Dicky is a true testament to Bale's performance .

David O. Russell continues to be a great director and The Fighter continues the streak. I was more surprised to see Darren Aronofsky in the credits as an executive producer. Already having directed the masterful Black Swan earlier this year, he adds another notch to his belt with this effort. Plus, I think it's awesome that now he's worked on a movie called The Wrestler and now, The Fighter. Who doesn't like themes!

This is worth seeing for Bale's performance. The story doesn't offer up anything you haven't already seen, but that's okay. What it does, it does right. Til next time, later geeks!