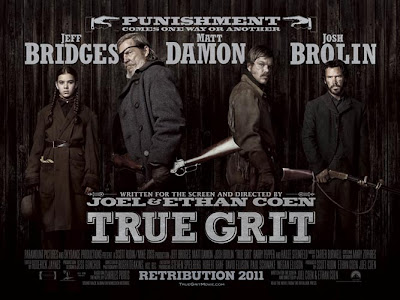 So I didn't know much about True Grit before going in. I saw the trailer once and it didn't tell me too much. All I knew was that: a.) it was a western, b.) that Jeff Bridges looked totally bad-ass as a one-eyed marshall, and c.) it was a movie done by the Coen brothers. I knew not of the story or much else, but I was sold on all those 3 points.

True Grit follows the story of a young girl named Mattie Ross who seeks vengeance for her father's murder, a killer by the name of Tom Cheney (Josh Brolin). In tracking him down, she enlists the help of a drunken US Marshall (Jeff Bridges), reputed for being the toughest Marshall in the territory, as well as a Texas Ranger (Matt Damon). The band tracks Chaney down in the Indian territories, but are continually hindered by each other's presence ie. by constantly doing the equivalent of comparing their penis size.

The movie is nothing short of amazing, if anything, for the performances of the main players. Jeff Bridges and Hailee Steinfeld (who plays Mattie) own their respective roles. Bridges exemplifies the drunken/grizzled veteran and breathes his unique take on this character. I've never seen Steinfled in anything before, but I thought she did amazing playing a 14-year old quick witted, fast talking girl. She was 14, but she made you believe that she could have been 40. The surprise for me was seeing Barry Pepper. I've always liked him as an actor and always thought that it was too bad that he always played second fiddle characters (I still think he would of made an awesome Captain America, just look at him). Anyhow, I hardly recognized him underneath the heavy makeup, the outfit and the accent, but he was pretty awesome despite the short role playing the outlaw leader.

It hasn't earned any Golden Globe nominations this year. It's a shame, if anything, I think it deserves a nod for Jeff Bridges performance, but hopefully the Oscars will hold up better. The story is a bit straight up so I can understand why it might not receive a movie of the year award (that, and it's a remake), but the story was still well told, that can't be ignored.

The past week I was thinking about my top 10 list, and really, the movies I feel deserve to be on the list are not more than 3 or 4, so it will be interesting this year. That said, you can count on seeing True Grit up there. Just where, I'm not sure yet. This was a fantastic movie. It's the Christmas season, go see it if you can and bring the whole family! There's blood, guts and all! Til next time, later geeks!