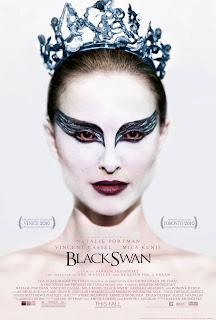 When I got home on Friday night after seeing Black Swan, I texted my friend whom I went to see it with. I was thinking about the array of films that director Darren Aronofsky has undertaken in his film career. I texted my friend, “I don’t think it’s possible for Aronofsky to make a feel-good movie”. It makes you wonder, because as of right now, he’s attached to make the next Wolverine movie. So will it be an arthouse Wolverine movie? An existential look at everybody’s favourite mutant? So Black Swan is not a feel-good type of movie, but it is a brilliant one.

The story follows an aspiring ballet dancer named Nina (Natalie Portman) who toils herself in winning the lead role in a ballet called Swan Lake. The lead role requires the dancer to take on two different styles; one representing the White Swan, who dances gracefully and perfectly, the other, representing the Black Swan, who is a more passionate and seductive character. Nina perfectly portrays the White, but has difficulty taking on the Black. The pressure builds on when a new dancer named Lily (Mila Kunis) enters the mix. Lily is a bit more reckless than Nina, but more passionate, clearly something Nina lacks. She feels her spot in the ballet is threatened with Lily’s presence. From here, the pressure builds; from her mother, from her director, but mostly, from herself. The movie follows her life as she spirals in reaching perfection.

When I look at the movie as a whole, in a way, Black Swan is a merger of sorts between two of Aronofsky’s previous efforts: The Wrestler and Requiem for a Dream. It’s like The Wrestler in how it follows a character journeying through, perhaps obsessively, in a niche performance based profession. We see the difficulties and struggles with the characters as they accumulate more pressure; sometimes self-imposed, sometimes not. Where they differ is depiction of that pressure. For Randy “the Ram”, we see the physical consequences resulting from his actions whereas with Nina, the struggles and frustrations manifest themselves in a more psychological form. This is when it turns a bit more Requiem for a Dream-like. Even from a stylistic point of view, her obsession and delusions are somewhat akin to the depiction of obsession in Requiem.

Needless to say, the movie was brilliantly directed by Aronofsky. He’s capable of drawing so much varied emotions throughout the movie. You can feel the pressure that Nina puts on herself, you can feel that nervous tension that she has with her peers. There are even moments in the movie where you’ll feel genuinely terrified. Obsession, with anything, is never a good thing, and Aronofsky is gifted in showing this with almost all his works. After watching the movie, it made me think though, that instead of a Wolverine movie, I’d rather see him direct a horror movie, because I truly believe that it would be a frightening one.

Much has been said in the press of Natalie Portman’s performance, and really, there’s nothing to be argued. She is magnificent in the role as Nina. I’ve always thought of her as a pretty face and nothing more; her acting never convinced me that it was anything spectacular, but this movie changed all that. You can see she pushes her acting chops (and I’m NOT referring to the awkward ‘love’ scene by the way).

This movie falls easily into my top 10 of the year. Not hard a hard task this year. We’ve seen a ton of shit. I haven’t thought about it much, but right now it’s only a list that’s 3 deep. But it feels good to know that there are still great stories to be told by storytellers who know how to tell them. A diamond in the rough, if you will. Check it out if you can! Later geeks!