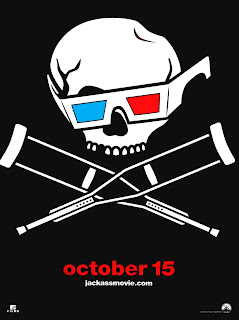 So before I talk about Jackass 3D, let me preface it with a real life story. So last week, I bared witness to a Jackass-like scenario. My work's office is on the 21st floor of a building in the upper downtown area where my office space is right by the windows, facing Toronto's west. I've got a great view of the city and an even better view of the apartment building that is right beside ours. So last Friday I was sitting at my desk and out of the corner of my eye, I see a bunch of teenagers hobbling on top of the roof. Bad. You see, the apartment building is about 20 storeys high — a long way to fall. And of course, teens are teens, and you know they're up to no good when they're on roofs. So they're smoking what they're smoking, drinking what they're drinking, walking around on the roof without any sense of balance. I ask one of the managers at the office whether we had the number for security in that building. She instead wisely calls the police. When I get back to my cubicle, I see one of the teens, sitting on the edge of the ledge, and he pushes himself off! Thankfully, there is a deck below, about a 15 feet drop, but unfortunately, the fall is padded by concrete. This numbskull of a teen lays there, with either a broken leg or ankle. I tell this to the manager, and she calls for an ambulance as well. Meanwhile a good bunch of us at work are just watching this trainwreck of a scene. Thank goodness the teen didn't land on his head and thank goodness there was this platform below. But really, how stupid can you be?! We all shook our heads but at the same time, couldn't turn away from this scene that was the blackhole of intelligence.

And that brings us to Jackass 3D. Really, there's almost no point in writing about this movie. Chances are, you already know what you're getting into when you cross the line into the theater. Expect human torture, feces, bodily fluids (including the "bodily part"), vomiting and so forth. It's the childish part of me, but I love this kind of comedy. Sometimes it's unbearable and cringe-worthy, but there comes a sense of relief after each "stunt" when the performers walk off laughing... even if they get nutted.

Jackass in general holds a special place in my heart. The first movie came out when I was in my first year of university and it was one of the numerous things that helped me bond with my floormates. Watching dumbasses do dumbass things can really bring a group of young guys together.

There's not too much I can say about the 3D except that seeing shit and vomit in 3D really brings the medium to a new light. At first I was intrigued, but now I wish I could unsee things.

If you love Jackass, then you're going to love Jackass 3D. And if you don't, you probably had no intention of doing so anyways. Til next time, later geeks!