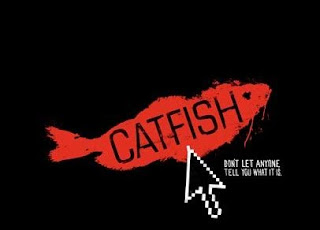 Before I say anything, I want to note that this will be a SPOILER-FREE look at the film, just in case you're fearful of anything important being revealed. And I think that it's best to go in this way anyhow. After all, "Don't Let Anyone Tell You What It Is", is the tagline.

I caught a screening of Catfish last night and I'm still reeling in from the whole experience. It has been circulating the film festivals over the past year, oftentimes stealing all the attention. The film has created an electric buzz over its audience, causing fervent discussions amongst the crowds.

Catfish is a documentary about a young man named Nev, chronicling the heated relationship he made with a girl he met on Facebook. He's a New York photographer who connects with a family in Michigan after they see his work in a newspaper. They start sending him paintings of some of the photos he takes, painted by a 9 year old prodigy named Abby. He starts to develop a relationship with each member of her family, with all contacts made through phone, texting and Facebook. He soon falls for Megan, Abby's older sister, an artist of sorts. She appears to be a stunningly attractive young woman, with the artistic talents to match. To Nev, she is THE package. Nev's brother, being an amateur film maker and his best friend Henry, document the whole thing from the beginning, thinking that the story of a child prodigy connecting to his brother via Facebook would make an amazing movie. But the movie they end up with here is something radically different from what they expected.

This film was quite the emotional fare. Most of the time you'll laugh, but you'll also cringe with tense fear while saddened at other times. I think the sadness aspect is what hit me the most about the movie. The third act is where a revelation is made, and pretty much afterwards, it's a downer. You can't help but feel sorry for so many of the people involved. I think it's going to be effective for a lot of people because they can relate to situations like this. I think it's going to be a powerful film that will appeal to the internet savvy-youth generation, specifically the 20's crowd and those in their young 30's.

I think this movie is going to cause a lot of discussions. For one, people are going to talk about the validity of the movie and how truthful it is or isn't. To me, whether it's true or not almost doesn't even matter because I'm quite sure that things like this happen in real life. It doesn't change the fact that these things happen. Which leads to the second discussion point: the subject matter. As I mentioned in the above paragraph, I think a lot of people can relate to situations like this, bringing about the topic of social networking and identity, specifically, when the two blur together.

Yes, 2010 was a year for some shitty movies (at least so far) but at least it's producing movies that have people talking. Inception, for one, this, as another, and I'm sure Black Swan will have people talking too. The movie is getting the Paranormal Activity-treatment. It's being released in selected markets at the end of this week, but it catches fire with the public, it will receive a wide release. You can request if for your city (here).

If you can, watch this movie. And better yet, bring along a group of friends. This is one to experience together. Til next time, later geeks!