A Society In Rehab 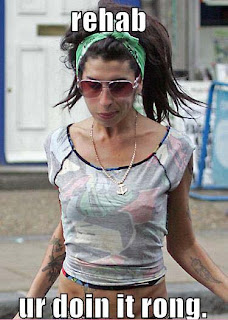 I was playing catch up with last month's issue of Esquire and I read an interesting article by Stephen Marche called "Have We All Gone Completely Nuts?". He talks about how our culture has changed this idea of redemption.

Here is a small excerpt from the article:

"For millennia, Western culture had a very simple system for dealing with bad actions. You sinned, you recognized it, you decided you wanted to change, and you were redeemed. This neat little system was called Christianity. Now "sins" are called "bad choices", and for the price of a stay at Hazelden or Pine Grove, redemption comes in the form of rehab."

The other day, I was having a conversation with my brother about this article. This idea that rehab leads to redemption can't be more visible than it is in popular culture today. You don't have to think too hard to come up with a handful of celebrity names that have been through this in the past year. But in a way, isn't this just a band-aid solution?

So my brother was telling me about a friend of his who went through some hard time with the law and was required to go to rehab. He told me that part of the rehabilitation process involved taking courses dealing with mannerisms, how to carry out conversations, gaining self-esteem and confidence, and so forth. Which is really good, but then I got to thinking, isn't this sort of backwards?

In the industrial and engineering world, they'd call this an end-of-pipe solution; that is, handling a mess after its happened. Oftentimes, this is an expensive process (think oil spill, disastrous!), and so lots of research and development are put into efforts to prevent a disaster before it can happen. So why can't we do this with people?

And I know this is a can of worms in of itself, but it got me thinking about the education system in Canada. It all seems like a by the books, thinking inside-the-box type of system. Why not teach these social skills? I don't know how much more important are these human skills than say reading or math, but to me, they seem just as weighty. I think about those things like mannerisms, self-esteem and confidence, and how much I could have benefited from such teachings (not that I'm that ill-mannered or confident). But I guess the problem is whether this type of material is didactic at such a young age. And also, how do you make it stick?

Then there's also that topic of redemption packaged into rehab. Another can of worms. I'm not going to get into it, but our world is a dark place and I'll leave it at that. Later geeks.