September 20, 2010
Over the past week I got to watch two comedies produced by either current or alums of Saturday Night Live. Both were quite decent on their own rights and I was surprised at which one I enjoyed more, but that's not to take anything away from the other. 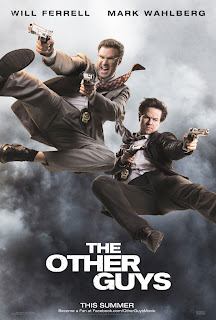 Ah yes, the pairing of Will Ferrell and director Adam McKay. They've been quite the epic duo in the past, producing such legendary hits as Anchorman: The Legend of Ron Burgundy, Talladega Nights: The Ballad of Ricky Bobby and of course Stepbrothers, a movie that's close to my heart. This time around, they've added Mark Wahlberg into the mix. Is the chemistry harmonious or explosive?

Gamble and Hoitz (Ferrell and Wahlberg) are two cops who are not exactly the cream of the crop at their police department. They are 3 degrees below the superstar cops Danson and Highsmith (Dwayne "The Rock" Johnson and Samuel L. Jackson) who Gamble admires with a fanboy like awe while Hoitz looks on with disdain and jealousy. You see, Hoitz really wants to be the supercop that he believes he can be, but feels held down because of his dimwitted partner. After a tragic accident with Danson and Highsmith, Hoitz sees an opportunity to rise to the top. Along with Gamble, they inadvertently uncover a huge corporate scandal after their investigation of what would be a scaffolding permit violation.

So for whatever reason, this movie just didn't feel like a home run for me. They played all the right cards, but it just didn't win me over as much as I hoped it would. I think it was a case of overhyping the movie for myself, and so when I finally saw it, I felt a bit let down. The casting was amazing and given the pedigree of the writers, I knew the story was going to be great as well. Don't get me wrong, the movie is good, it's just that I wouldn't put it high on the pedestal like I would with Stepbrothers or Anchorman.

Will Ferrell plays Gamble in a the subdued-Will-Ferrell form. You've seen it before on Saturday Night Live. It's funny because he's subdued, when you know he's over the top usually. But unfortunately, it's only funny for 10 minutes, not for over 100 minutes. He doesn't have as many zingers or one-liners as in previous movies, which I guess keeps it from that legendary status. Wahlberg who is rarely in comedy movies does well playing the pissed off cop that doesn't understand Ferrell. It's what you would expect from Wahlberg, but it works because he gets to play off of Ferrell. In a stroke of a genius, my favourite casting in this movie is Michael Keaton, who plays the chief at the police department. You don't see Keaton much on the big screen nowadays, so it was definitely a welcome to see Mr. Batman himself, especially in a comedic role.

So I guess why it didn't exactly click with me was because of the story. I just felt like they could have done so much more with it. I love the premise, and just reading the synopsis alone, they could have done so many more bits. But what we get are bits every now and then, mixed in with small laughs in between. There were no knee-slapping uproarious laughs like I had with all the other McKay movies. This felt like a much more grounded fare as compared to the other movies in his repertoire, which I suppose is a good thing. But what I really do like is the moral message at the end of the movie, which for me, saves this movie from the neutral realm to the slightly-thumbs-up category.

The message is quite true too. You in your own life can be a hero doing what you do, taking care and loving the people around you. You don't have to be an action star to hit that status. Oops, I should have said SPOILERS, haha. 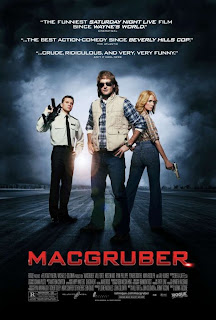 If The Other Guys can be considered a grounded comedy, then MacGruber should be considered a balls-out, all-out laughfest. Simply put: I loved this movie more than I thought I would of. It has action, it has comedy, it has romance... it's all there!

Spawned from the 30 second sketches on Saturday Night Live, MacGruber is a full length feature that spoofs on action movies of the 80's, but especially of the TV show, MacGuyver from the same era (trivia note: MacGuyver was a house favourite here at the Lam household when I was a kid). The movie follows MacGruber, who retired and became a monk of sorts, as he tracks down a terrorist named Dieter Von Cunth (imagine that for a last name... eek). MacGruber seeks vengeance on Cunth who was responsible for his wife's murder, which led him to become a monk. But MacGruber is not alone thanks to his trusty team in the form of Vicki St. Elmo and Lt. Dixon Piper. Can MacGruber and his team stop Cunth (ugh) from a nuclear chaos?

I much enjoyed this movie, being a child of the 80's, having experienced cheesy 80's TV shows and movies. The comedy is silly and even childish at times, but shit, I guess I'm silly and childish at times. The movie just made me laugh. It was stupid funny, but funny nonetheless. It all works thanks to Will Forte (MacGruber), whose comedic timing is spot on. Forte isn't afraid to put himself out there, in what would be humiliating circumstances, all for a laugh. Forte is teamed with Ryan Phillippe, another actor who isn't generally known for comedy, and it works, similarly to the chemistry of Ferrell and Wahlberg. Phillippe does get out of his roots a bit, even if all it takes is a bit of celery (you'll understand if you watch it). Another SNL member, Kristen Wiig almost steals the show as Vicki St. Elmo.

It's unfortunate that the movie fell flat at the box-office. Perhaps Will Forte isn't as big of a box office draw as one could hope he'd be. He, along with Bill Hader, were two shining stars in that SNL cast, and it's unfortunate that he wasn't re-signed for this coming season. It's also too bad as MacGruber sequels will now be highly unlikely. There was so much potential there though!

It's on shelves now, and if you do like silly comedy, have a go! Especially if you were alive in the 80's. Til next time, later geeks!