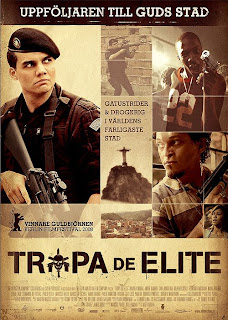 Tropa de Elite (or Elite Squad) is a Brazilian made film dealing with the corruption of the police force and the conflicts against the drug lords in different divisions of Rio de Janeiro called favelas. It was released in 2007 to much acclaim including winning the best feature at the Berlin International Film Festival that year. It garnered much success in its home country of Brazil, quickly becoming one of the most watched movies in the country.

The movie follows a captain named Nascimento who is part of an "elite squad"called the BOPE, who are analogous to the ATF locally. Because the police force is so corrupt, the BOPE is needed to stay above the law that is above the law. They are a presence feared by everyone in the city, including the druggies and gangs, as they take no shit from anyone. But Nascimento is getting worn down by the risky nature of his job, compounded by the pressures of becoming a father, and so he seeks a replacement for his position. Two new recruits are quickly singled out by Nascimento: Neto and Matias. The problem is, each candidate possesses something that the other is missing. Neto, while ruthless and impulsive, has all the heart, but lacks the brains. Matias, who is highly intelligent, unfortunately lacks that intestinal fortitude. If only the two were combined into one, the problem would be solved. From there, the movie follows each man as they build themselves up as men of the law, while taking down drug cartels and other hooligans.

This was a brilliant movie. A man’s man’s movie. It is raw, it is rugged, it is ruthless. I’ve seen many horror movies, believe you me, but I don’t think I’ve seen violence this in your face with brutality. But I guess it’s two different sorts of violence. In horror movies, deaths are so fantastical and outrageous that in a way, it is beyond the realm of believability, whereas deaths in movies like this are a bit closer to home. Deaths like these happen every day. The most brutal scene was seeing a woman getting shot point blank in the face. There are no cuts or pan arounds to the back of the head. We see it upfront, head on and it’s brutal.

The story and the style in which it is shot make the whole journey a visceral one. We grow with these men as they enter the BOPE with a child-like innocence and as they mature into hardened men of the law. The movie was made in an almost documentary like fashion, similarly to Hurt Locker, putting is square in the middle of the action.

It’s definitely a movie to check out and watch with a group of guy friends. If you see it on the store shelves, I recommend a rent at the very least. Til next time, later geeks!