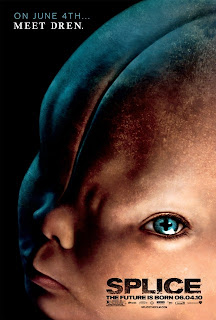 I'm still reeling in a bit from seeing it. It was altogether a very good movie (in the sense that Inception was also very good). Great? I'm not sure at the moment, but that could change soon. I watched it a few days ago and since then, I've thought a lot about it and I like the types of ethical questions they pose in regards to science. Mix that in with elements of sci-fi with horror and drama, and you get one unique film. Also to note, it was probably also one of the most disturbing movies I've ever seen.

In Splice, we follow two scientists, Clive and Elsa (Adrien Brody and Sarah Polley), who successfully create a new species by splicing the DNAs from different animals together. The company who they are funded by wishes to take their research into a new direction and fearing that they would be relegated to mundane research, they start taking matters into their own hands by secretly conducting experiments: splicing animal with human DNA. The new creature they create, Dren, is at first startling, but becomes more tame after they start nurturing it like a baby. Elsa becomes particularly attached with the reasons being slowly hinted at. They discover that Dren ages at a substantially faster rate than humans where some of her feelings and emotions begin to mature. This spells trouble for our scientists.

The first thing I should point out is that they sold the wrong kind of movie from the trailer. When watching the trailer, you get the feeling that the movie is some type of horror and thriller movie, but it's really not. The scares are few and it opts more towards the human story — is what they're doing right? I think it's why I enjoyed this movie. Despite the horror and sci-fi background of this movie, it gave me something to really chew on and think about. When is far too far? Where is the proverbial line?

The director of this movie was Vincenzo Natali who also did the much beloved Cube back in 1997. Also, much like Cube, Splice was a Canadian production, which makes me more proud that I enjoyed the movie. All the effects are spectacular, particularly those of Dren when she's at an earlier age, which I believe is entirely CG but I could be wrong.

At the beginning I mentioned that it's one of the most disturbing movies I've seen. I don't throw that term around often because I rarely get disturbed especially from movies. In a way, I think horror movies have desensitized me from horror movies (I say "from horror movies" because real life gore still makes me squirm). But there's this one scene in the movie, which I shan't spoil for you, that is probably the most weirdest (check that, WEIRDEST) and most disturbing scenes that I've ever laid eyes on. It's a tough watch.

I should mention that the span between the first paragraph and the previous one was about 6 days, and I think between those days, I've had the movie sit on my mind more and I think I really enjoyed it. It's worth a watch, but I'm going to warn you that about 3/4's of the way, something weird happens. Just saying. Later geeks!