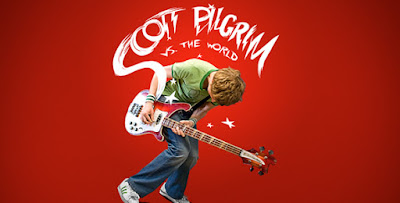 Yah, I really enjoyed this movie. It's a shame that it's doing so bad at the box office. In its second week of its theatrical run, it amounted to only 10th place for the weekend. A poor showing. But it was interesting. I went to see it in downtown Toronto with a crew of guys and to my surprise, the theater was nearly packed... and this was a Monday night! It's weekend revenues surely did not reflect this particular cinema. But then again, for this particular movie, Toronto theaters might be biased as our city played host to the movie.

The movie opened up with a 16-bit version of the Universal Pictures logo complete with 16-bit audio. As soon as that graced the screen, I knew I was going to love the rest of the movie. Immediately after, the voice over reads an introduction and proudly proclaims that the movie takes place in Toronto to which the theater I was at erupted in applause. Finally, a movie that doesn't try to hide it! 90 seconds in and we're 2 for 2.

Scott Pilgrim VS The World is based on the hit comic/manga series by Toronto native, Bryan O'Malley. Much like the comics, the movie follows Scott Pilgrim as he does battle with each of his new girlfriend's evil ex-boyfriends. Seven of them in fact. That is the story in a nutshell, but there is so much more. There's a plethora of background characters that are fully fleshed out and who are constantly interacting with Scott. Add to that the tons of visual and audio video game cues and you've got quite the pop culturey movie. 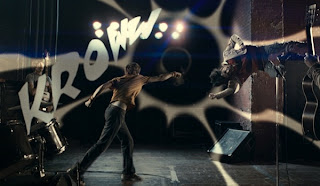 Thankfully, the story stays very true to the source material, deviating only slightly. It trims a lot of the fat and a few times, combines different ideas from the book into a single scene. What we get is a more streamlined version of the books, making it a lot easier for us, the audience, to follow. It's pretty amazing, considering 6 books were summed into a 2 hour movie. O'Malley must have been in constant dialogue with the production of this movie, as the 6th and final book of the series was only released in July, when the movie was already done for several months. Yet the ending scenes in the movie kept close to the books.

I think what I loved most was how much video games influenced this movie. And I'm not even talking about the playing of video games, which actually only happens three or so times within the movie. But so many of the different elements we find in games are incorporated into the movie. Things like life bars, stat points, levelling up and so forth. The movie does a great job of bringing these ideas (which were in the book) to life on the big screen. But not only that, it also expands on these ideas in ways that you can't in a comic book. For instance, the Zelda video game music that gradually turns into part of the score for the movie. Now that I think about it, a lot of the sound effects from the Zelda games made it into the movie. That is fantastic. Speaking of the score, the music was another highlight of the movie. It had a killer soundtrack featuring not only original tunes by the in-movie band Sex Bob-Omb, but also from Metric, The Rolling Stones and Beck, just to name a few.

As far as major motion pictures, director Edgar Wright goes three for three with Scott Pilgrim VS The World. It's hard to rank this amongst a lauded filmography which includes Shaun of the Dead and Hot Fuzz given the gravitas of both films, but I'd say it fits nicely right in between them. 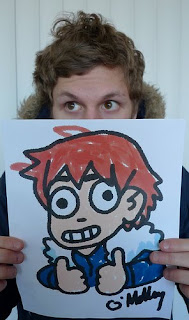 The cast was near perfect and really felt like their comic book counterparts. I knew Michael Cera was going to be spot on as Scott but that wasn't hard, considering all he had to do was really just play himself. But going in, I was unsure of Mary Elizabeth Winstead who was playing his main lover, Ramona Flowers. She certainly looked the part, but I feel, of all the characters in the movie, she had the weakest performance. It was really subdued and uncharismatic compared to how we see her in the books. With such a wide array of characters, there are so many favourites that I could choose from. Brandon Routh's vegan powered, super saiyan, evil ex-boyfriend was clearly my favourite evil ex-boyfriend. But overall, I think I'm going to go with the unconventional choice. And that is Bill Hader, as "The Voice". "The Voice" added so much and was pivotal to all the key scenes yet is this unseen force that can be easily forgotten when it's all said and done. And I admit, Bill Hader is probably one of my favourite comedians/impressionists.

The only thing I have to complain about is that they never really took advantage of all the different locations that Toronto had to offer. So many times, they're just hanging around the Annex area (@ Bloor and Bathurst). Our city is so eclectic and multicultural that I think it was a failure that they didn't explore these avenues more.

Today I was thinking about the cyclical progression of how this movie came to be, and in a way it forms a full cycle. Bear with me (with my nerdiness). A lot of times, movies inspire video games (perhaps more so nowadays than before). Video games then inspired Bryan O'Malley to write this series of books. These books are then adapted into a mainstream movie, thus completing the circle of life.

A lengthy review, but I had to get it all out. Anyhow, I admit, my love for this movie may be extremely biased as it is: a.) extremely geek-centric and b.) it takes place in Toronto. Still, it's a solid (if not hyper) look at young love and you can't go wrong with that. Honestly, if you grew up in the 8-bit or 16-bit era, you've got to see this movie! In fact, it's more than a movie, it's an experience. Til next time, later geeks!