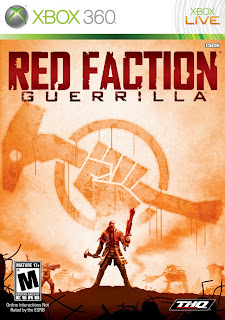 Destruction at its very best.

So the only reason why I ended up reviewing Crackdown a few months ago was so that I could talk about Red Faction: Guerrilla. The gameplay was so similar that I couldn't ignore it. But whereas Crackdown irked me, RF:G brought joy.

Red Faction is a futuristic open world game that lets you play as a miner named Alec Mason who is new to Mars. He is reunited with his brother who is part of a rebel group called the Red Faction, who are united against an evil empire like group called the Earth Defense Force (EDF for short). But their reunion is short-lived as his brother is assassinated early on, prompting Alec to join the RF. From there, you travel from region to region, freeing the Mars colonies from the oppression of the EDF forces.

At its core, the game plays very similar to Crackdown, with a loosely held story opting to let you choose your own paths. You can basically do whatever you want although on the mission side of things, you get your choice between side missions (which occupy most of your time) and story missions (which are fewer, but progress the story). Side missions are where you'll end up spending most of your time and can have you doing a range of things from rescuing hostages, to destroying buildings or even racing, to name a few. Doing these missions will affect two gauges: civilian morale and EDF presence. The two work inversely, basically the more morale you gain, the better, as the civilians will aid you on missions or whenever you find yourself in a bind. Conversely, the lower the EDF gauge the better, as their lowered presence means more freedom for the colonial people. Before you can attempt any of the story missions, the game will require you to reach a certain level on the EDF gauge before you can progress further. So you'll end up having to do a handful of side missions, but whether you want to complete them all is all up to you. 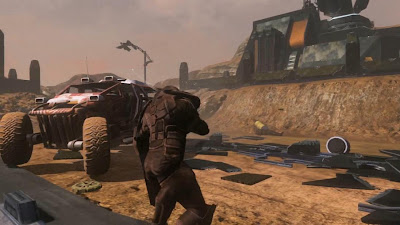 The game provides you with an array of weapons of which the civilians will research for you as you progress in your game. These include different rifles, rocket launchers, grenade launchers and so forth. But nothing brings more joy in the game than the default weapon that you're provided with: your trusty hammer. It's almost for this sole reason that makes the game so fun. You can run around taking down fortress-like buildings with just your hammer as well as batting off enemies into the air, killing them with a single blow. But what really makes this great is that the game has this memory system to remember every little bit of destruction that you created. Even the slightest dent you make to a building will be remembered if you were to save and re-load a game. It's unlike any game I've played before where more often, buildings and objects are restored on a reload. It is quite amazing.

There are a few downsides to the game though. Because it takes place on a colonial Mars, the terrain that you encounter in each of the different zones don't vary too much. Besides appearing in different colours, the terrains are quite homogeneous, not exactly the most scenic game. Get ready for lots of rocky landscapes. Also, story in this game is downplayed, with more focus on game play than enveloping you with plot points. It becomes a problem because they don't build up the EDF empire that well and it becomes a faceless organization, making the ending quite anti-climatic.

Still I had much fun with this game than Crackdown. The game, even at its normal difficulty, brought tons of challenge, enough to keep you on the edge of your seat but keeping the F-bombs from dropping. You can probably find this game on shelves marked down at your favourite gaming store and I definitely recommend it for some mindless fun. Til next time, later geeks!