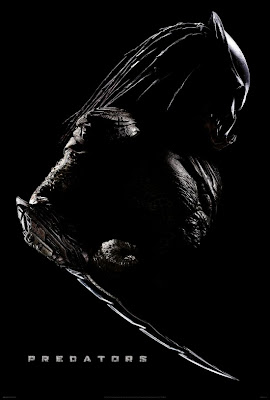 I guess I should forgive 20th Century Fox. I've heard stories of how they're bumbling idiots, especially that fool Tom Rothman who's at the top of the monkey chain over there. And heck, he's probably still an idiot, so I'll partially forgive them for ruining some great movie franchises. But to their credit, at least one of the monkeys over there had the foresight and knowledge to recognize that they shit the bed with the Aliens VS Predators franchise, effectively ruining two highly regarded series in the geek community. So whoever it was up there realized that they needed to wash away people's memories of that hogwash.

And so after deciding that the series needed a refocus, they went to a geek favourite to remedy their mistakes: Robert Rodriguez. Rodriguez was originally tapped to breathe in new life into the franchise, but because of scheduling conflicts (his work on Machete) he oversaw the project as a producer at his Troublemaker Studios. There were a bevy of directors set to helm the feature (including Neil Marshall, which would have been pretty awesome I think) but it ultimately fell into the hands of Nimrod Antal, who garnered a modest amount of success with Kontroll, Vacancy, and Armored. I think many people weren't convinced whether he could pull it off or not, but Rodriguez kept close to the project, which for me, was a vote of confidence.

The movie follows a group of strangers as they discover themselves kidnapped and placed in a foreign land. They soon realize that each member in their band has something in common; all are renowned killers. Coincidence or not? It's not long before they find themselves hunted by an unseen force and join together to take down their would be captors. It's only then that they discover that they're not on earth at all and that they're being stalkd by alien beings.

So yes, it is a good movie. This is finally the proper sequel to the Arnold/testosterone-filled original. It captures the spirit and atmosphere of the original movie, paying respects in many ways. I found it interesting that they connect more with the original and sort of ignore everything that happened afterwards, which includes the Danny Glover sequel.

What really made me like this movie is how they expanded on the Predators lore. They told us new things about the way they live (or their culture, for lack of a better word) without being too hokey. There is also this great sense of dread in the first act of the movie all from the idea of suspense. You see, we know and are repeatedly shown that our heroes are being stalked by their invisible killers, yet they have no idea themselves. It makes for great tension.

I don't want to be too spoilerific, but I would be remiss if I didn't mention my favourite scene: yakuza swordsman VS Predator. I am so glad that this scene was in the movie. It made it for me.

But it's not all smiles and sunshine. I did have a few problems with the movie storywise. It involved two specific characters who sort of do a turn on our group of heroes. Both are predictable, but that's not the problem. The problem was that the turns added nothing to the movie. It just sort of happened and never really added any tension to the story. In fact, one of the turns seemed very reminiscent to Tim Robbins' character from War of the Worlds (2005), which I recall, a lot of people had problems with.

Despite all that, I enjoyed the movie because it captured the spirit of the original, added in some good action and expanded the Predators mythos. It's all in good fun if you enjoy the Predator movie. Until next time, later geeks!