Waco: The Rules of Engagement 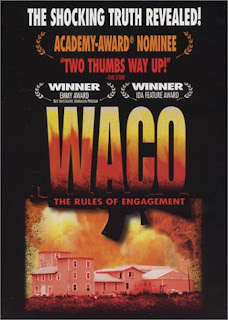 Earlier last week I was browsing around on IMDB as I normally do and was looking up the movie Stigmata — a movie that I hadn't seen in a long time but enjoyed when I was a teen. I looked up its director, Rupert Wainwright, as I wasn't familiar with any of his works. Well, it turns out that he hasn't done too much since then but one of his upcoming movies is a movie called Waco due next year.

I remember the Waco incident very faintly. I think I was only 8 or 9 years old at the time, but I remember seeing pictures of the big fire on newspaper covers everywhere. It caught me and my brother's attention as it graced the covers of those "Globe News" fake newspapers (you know, the ones at your grocery store that are filled with ridiculous stories like UFO's, big foot, and Elvis sightings?). I remember there was one particular cover story that claimed that the leader of the Waco incident, David Koresh, was in fact Satan himself. I don't know why those newspapers don't fly off shelves faster!

Having piqued my interest again, I read up on Wikipedia about the Waco incident as well as the backstory of one David Koresh, the chosen leader of this cult group called the Branch Davidians, who were at the center of this tragedy. The story of Koresh is quite lurid, with stories of polygamy, child marriages, statutory rape and even impregnating underage girls. One of the articles pointed to an Academy Award nominated documentary called Waco: The Rules of Engagement produced in 1997. So I watched it this week and it was quite an interesting movie.

Going in, I thought I was going to receive one thing, but I ended up receiving another. I thought that the movie was going to give detail on Koresh, the Branch Davidians, their beliefs and behaviour, but alas it was totally not. Waco: The Rules of Engagement focuses on the standoff between Koresh with his Branch Davidians and the FBI.

The siege between the two groups took place in Waco, Texas and ended in tragedy. After a 50 day standoff, the death toll saw 4 dead government agents and 76 dead Branch Davidians, including that of Koresh. What ended the standoff was a huge fire that engulfed the whole compound, killing all of its inhabitants. But the fire itself is one of the centers of controversy. The final report published by the FBI claims that the Davidians set the fire off themselves in a massive suicide attempt. But what the documentary shows is something completely different and points the finger of blame around the FBI who not only drove tanks into the building but fired off supposedly non-incendiary ammo into the complex. We're played audio conversations that Koresh had with FBI representatives through phone and radio. The conversations they had just weren't consistent with what the FBI claimed were a suicide attempts. The Davidians were pretty much peaceful until their hands were forced and had to retaliate to fend for their lives. So you have a group of nearly eighty people in their compound peacefully, and one day they just set fire to themselves? Something doesn't add up.

Controversy also surrounds the FBI and ATF's overly aggressive tactics in trying to subdue the Davidians. Throughout the congressional testimonies, we're told that no one on the government side fired any bullets, yet there is footage that shows otherwise. It becomes even more corrupt when autopsy evidence showed that bullets were in the burnt Davidian corpses, showing that some were shot before they were burnt alive.

The movie was carefully put together by William Gazecki. The movie is clearly weighed towards one side and is convincing in doing so; it's hard to believe that the government side was innocent. It sort of reminds me of the Abu Ghraib incident a few years ago, an incident where the government was painted in a bad light (and deservedly so). Waco at times is also a horrific movie, showing us the corpses, some dismembered, some burnt, and unfortunately, some who are children.

There is a lot more controversy related to this incident. If you're interested, I suggest checking up the Wikipedia entries (of which you'll find many) or checking out this movie yourself. It is an interesting story, but a sad story all around. There's no happy ending for either side.