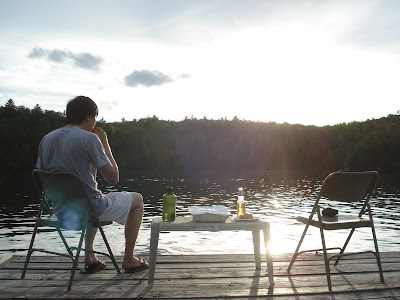 It was quite a turbulent but eventful week this last week, filled with high highs and low lows. As I mentioned in the previous posting, my small group at FT pulled off our third coffeehouse event with amazing results. I felt so elated at the end of the night, with the feeling that it was a success. On the flipside, that same night when I got home, I received a rejection from an interview I had recently and felt majorly down about. I've received many rejections in the past and moved on after each one, but for whatever reason, I felt overwhelmingly disappointed after receiving this one. I think I pegged more hope into it than I should of, and thus after such a high, I crashed down.

But the timing was interesting. You see, this past weekend was my friend Keith's bachelor party cottage weekend. My friend Matt and I were going to go up earlier than everyone else on Friday just to bring up gear and goods, and to enjoy the general peace that nature had to offer before 8 burly men would occupy the compounds. I knew that I was going to have some time away from distractions and just have peace so that I could talk to God properly about the heaviness in my heart.

So after a lengthy drive up, we reached the cottage and I spent about two and half hours sitting by myself on the dock looking at the lake, the sun and the clouds and took time to talk to God. I had many questions and prayers that I just needed to get out of my system. A friend of mine earlier in the week wrote me quite a lengthy and profound email, knowing that I was feeling down. He pointed out that in the Bible, there are many great men of faith who had to spend time in the wilderness. God needed them to feel desperate — to feel quietness and removed from distractions so that they could hear His voice. The wilderness is quite an important feature in the Bible. In old Hebrew, the word for wilderness is "meed-bahr" which is derived from the word "leh-da-behr", translated as "to speak". So as I sat there out on the dock, that's what I was hoping for — for God to speak to me. Either way, I was determined to speak to Him.

So I fielded out my questions, I prayed my prayers. I cleared my mind and was prepared to hear the Lord answer. What did He say to me? Well, I don't know. If He tried to speak to me, then it certainly was not with words. So I continued listening to the waters and breathing in the tranquil scene. I was wise enough to bring up my Bible, so I sat there and continued my readings through the Corinthians. A number of verses really stood out to me that I wrote down, but I wanted to share one of them with you today. It's from 1 Corinthians 10:22 and it reads, "Are we trying to arouse the Lord's jealousy? Are we stronger than he?".

Sometimes I do feel this way. I feel like I want my life to go a certain way and I want God to answer my requests so that it would follow this path that I had in mind. I'm trying to get God to walk with me on my path instead of walking with Him on His. God is truth and life, He is the great provider. I have to remember that even though He may be the provider, that I'm still the walker. He may show me the way, but it's up to me to walk it.

How does this all tie together with my life right now? I'm not quite sure. I figure it's definitely a life lesson. Right now, I think it's more directive than definitive. Now is the time to find out how I can align my path back with God's. I don't know how it's going to end up looking like in the final result, but I suppose that's what's exciting about it.

Anyhow, it was a contemplative and reflective weekend. I'm glad I got to spend some time in peace with the wilderness and also glad I was surrounded by a bunch of good brothers. God is good. Later geeks! 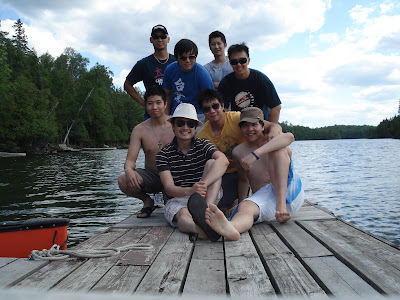 j-yeezy said…
Bro, I am a firm believer that you will succeed as your faith is strong! I am facing certain challenges, and adversities myself right now, but I know that I have to continue prayer and put everything in God's trust. HE will answer your prayers....
June 26, 2010 at 8:17 AM