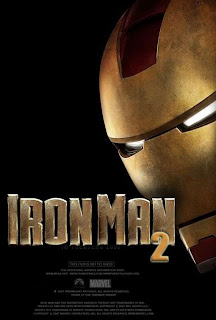 I was having a conversation with my brother the other day about this year's summer blockbuster movies. I concluded that there weren't many movies that I was hyped up for (but Inception and Predators are two of them). He brought up Iron Man 2, but I just didn't feel as pumped as I was before I saw the first one. I guess because I've already seen him on the screen, it took a bit of the edge off. But I went to see it on opening day anyways. So how was it?

The movie takes place a few months after the first one ended. We follow Tony Stark as he fully embraces being publicly known as the Iron Man. He showboats and galavants like the true star he made himself to be, famed for "privatizing peace" as he boldly claims. But not everyone is so enamored with Stark's swagger. The first is Ivan Vanko, a Russian who's father was Howard Stark/Tony's father's former partner. The two had a falling out, and Vanko the senior was deported while Howard received the notoriety for their scientific endeavours. Ivan who realizes all this seeks vengeance upon young Stark. The second is Justin Hammer who shows up in an effort to overtake Stark Industries dominance as the government's provider of military weapons. Unforunately, Hammer is always two steps behind the crafty Stark and relegates to other ways in trying to take the lead. All this happens while Tony comes to grips with his mortality as the Arc Reactor that powers his body is also slowly poisoning it.

Sounds like a lot right? But we're not done yet. Throw in Pepper Potts, James Rhodes, Nick Fury and Natasha Rushman/Romanov into the mix, and then we're done. 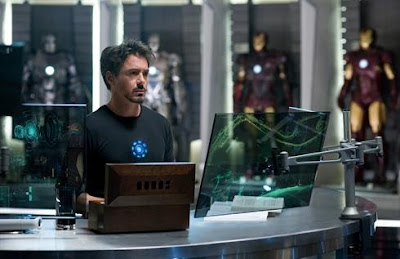 Tony Stark and a buncha suits.
When I first read the advance reviews (specifically the scathing Hollywood Reporter review), a common complaint was that there was too much going on, making it hard to follow all the angles. And it's true, there's a lot going on. But I feel like it was paced in such a way that it never seemed like too much. The primary focus of the movie is on Tony Stark. The movie never strays too far away from Tony. The scenes that focus on another character's subplot never overstay their welcome and we get back to Stark before its too long. So for me, this wasn't the problem.

The problem for me was the large middle chunk of the movie; it seemed like nothing happened... but at the same time, a lot of things happened. It's here that the movie spends most of its time in sort of a lull with more talk than action. I think it would have helped inserting a few action scenes here. You really only had one, with Iron Man fighting War Machine. So we had a two hour movie that was essentially two intense 15 minute scenes sandwiching a dull 1.5 hour movie.
On the bright side, whenever there was action, it was awesome. The first fight in Monaco was quite thrilling and showed us what Ivan Vanko (aka. Whiplash) was capable of. The end fight with Iron Man & War Machine versus everyone else was true geek bliss. I would have been a happier man had they just extended this scene to elapse the entire movie. It's fun watching the two work in tandem, as if War Machine by himself on screen wasn't cool enough. 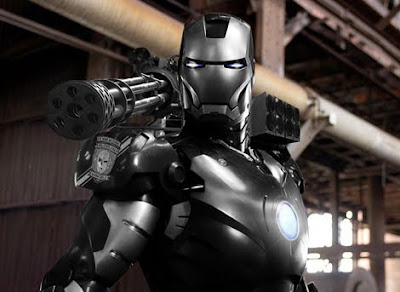 The greatness of War Machine.
Much like with the first Iron Man, the acting is top-notch across the board. Robert Downey Jr. further exudes himself as the pompous and arrogant billionaire only really restraining himself around Gwyneth Paltrow's Pepper Potts. I thought the casting of Don Cheadle as James Rhodes (filling in for the departing Terrence Howard) was a stroke of genius already having done well in Brooklyn's Finest earlier this year. Hollywood bad-ass Mickey Rourke really brings in a spirit of evilness to Ivan Vanko. When he walked on screen, I couldn't help but realize that's what's missing from a lot of villiains in other action movies these days; that on-screen presence of a character. He just had that look where you knew he was bad news. Looking back at The Losers which I watched last week, I think that's why I didn't like Jason Patric as the villian. They played him up as a goof and he never seemed believable as a villain.

The only character that seemed off was Scarlett Johansson's Natasha Romanov/Rushman (otherwise known as the Black Widow in the comics, although they don't refer to her as this in the movie). She wasn't really given much to do with except wear tight dresses and 4 inch heels. But I must say, it was awesome watching her in any of her fight scenes. Whoever the choreographer was for her scenes must have been a fan of lucha libre wrestling. She does many headscissor takeover moves on the bad guys, and it's a joy to watch wrestling moves on the big screen.

I was kind of surprised by how much setting up they do in this movie for the upcoming Avengers movie. Going in, I thought they were going to do little subtle things, but they talk about it blatantly and in fact, it's one of the subplots. There's even a cute exchange with the Captain America shield that made a brief cameo in the first movie.

So all in all, I'd say that the movie was marginally good but far from great. It's too bad, because they had all the right pieces, but unfortunately, I don't think they made all the right moves. Don't forget to stay after the credits end for a short but geekgasmic scene. I'm pretty sure you know what it's going to tease... or should I say, who it's going to tease. Til next time, later geeks!