Usually I end off my movie reviews off with the trailer but with a movie as illustrious as The Human Centipede, I had little choice but to lead off with it. Yes, the movie is as eff'd up as the title would suggest. However, despite the B-movie status that such a movie would garner, while circulating around film festivals this past year, it received a lot of positive reviews. Such a movie would only appeal to a niche audience so the positive feedback was a surprise.

The movie follows Lindsay and Jenny, two tourists in Germany doing some travelling. On one particular night, they head out to a club only to find themselves lost somewhere outside of the city. Unfortunately for them, one of their tires blow out and so they start searching the area for help. They get to the house of one Dr. Heiter, who at first seems reluctant to let them in, but after some thinking, succumbs to their request. This turns out to be the worst mistake of their lives. You see, Dr. Leiter is akin to a mad scientist. He once was a surgeon who specialized in separating siamese twins but after retiring he became mad and came up with this diabolical idea of doing the exact opposite... sewing people together from sphincter to mouth to create one interconnected digestive tract, thereby creating... THE HUMAN CENTIPEDE!

So I didn't get what the fuss was all about. The movie was okay, not great. But I suppose for a movie with this kind of a topic, any even slightly positive review from someone outside of the hardcore horror circles could be construed as glowing. It is pretty unconventional as per mainstream horror standards but I feel as a whole, it relies too much on that shock factor which doesn't have the legs (unintentional pun) to carry the whole movie. But if its goal was just to give you that initial shock, then I guess it worked. Trust me, the scene where one person defecates is not one to be forgotten. And it's not like the movie showed us anything. Really, it relied on the power of suggestion and our imaginations as all we can see most times are the facial expressions of the poor victims. 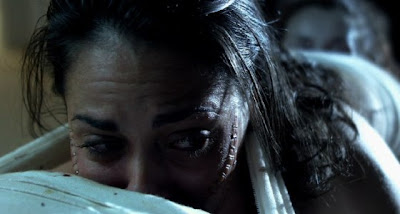 That said, the acting was pretty top notch all around. But given that a few of the actresses had their mouths full for a majority of the movie, it doesn't say much. Dieter Laser (what a name!) is a German actor who really brought to life the role of Dr. Heiter. He fully embodies the mad scientist role. A lot of the times it's not even the dialogue that brings out his evilness, but rather all his mannerisms like the creepy deep breathing as he takes in every moment.

I can't really highly recommend it, but if you're bored one afternoon, I suppose it would suffice if you took a gander... that is, if you're into this sort of thing. Til next time, later geeks!

the kuster said…
I cannot believe you actually watched this. I loath the day I first heard of this movie, just thinking about it gives me goosebumps and gross-shivers (you know, the kind you get when you think of something really disgusting - like stepping barefoot into a pile of maggot-ridden dung). Yea, exactly.
June 10, 2010 at 8:52 AM

The Lam said…
I'm such a sucker for things like this though :)